John Walker Adams of the Sons of Confederate Veterans carries out an 'e-attack' against an Intelligence Report writer — and then boasts publicly about it.

From the very beginning, a core mission of the Sons of Confederate Veterans (SCV) heritage group has been to defend what are seen as the intrinsic values of Southern culture, and especially Southern manhood. Former Confederate Lt. Gen. Stephen Dill Lee, setting out the goals of the SCV in 1906, directly invoked the chivalric virtues so loved by the South:

To you, Sons of Confederate Veterans ... will be given the defense of the Confederate soldier's good name, the guardianship of his history, the emulation of his values.

Even the preamble to the SCV's 1896 constitution celebrates the South's "glorious heritage of valor, chivalry and honor."

Today, that much-vaunted Southern chivalry is taking a beating.

Engaged in a vicious internal war with SCV moderates who say their organization is becoming a home for racists, the extremist SCV leadership headed by Commander-in-Chief Ron Wilson has been accused by the moderates of a series of disreputable moves.

Opponents say Wilson has attempted several end runs around the SCV constitution as he seeks to crush the power of the moderates. Some 300 Wilson enemies have been suspended, and one key leader was suspended a second time after Wilson was repudiated in a tied executive council vote.

Racist jokes and appellations like "f-----" have flown fast and furious. Many in the extremist faction have done what they could to tarnish the reputations of their enemies.

But one particularly unpleasant attack may come to symbolize the unsavory depths that this internal civil war is now plumbing. It involves an Intelligence Report writer, a top SCV official, and the entire SCV General Executive Council.

And its contents would make a sailor blush.

Researching the SCV
On Sept. 28, 2002, Report writer Heidi Beirich, who has done most of the reporting for a series of articles on the civil war within the SCV, wrote an E-mail meant for SCV Executive Director Ben Sewell.

The E-mail mentioned the refusal of several SCV chapters and officials to recite the Pledge of Allegiance to the U.S. flag (as opposed to the Confederate battle flag), and asked for Sewell's comment.

Beirich's E-mail was misaddressed and went to John Walker Adams, the SCV's adjutant-in-chief, whose duties included running its Tennessee headquarters, maintaining all its records, and issuing orders to carry out directives of the group's commander in chief.

Adams, who runs the SCV's Web site and oversaw the official SCV Dispatch E-newsletter until it was shut down this September, was appointed to his position, which includes executive board membership, by Wilson. A resident of Deltona, Fla., Adams is also the commander of the Florida SCV division.

Adams, 47, forwarded the message to Sewell, along with a note calling Beirich a "twit" because she had the wrong address for Sewell. Adams also sent copies of his forward to all other members of the SCV executive council.

On Oct. 23, 2002, Beirich sent another E-mail to the executive council and members of the SCV's Heritage Defense and Media/Public Relations committees, including Adams. She asked for comment about a series of racist statements that had appeared in the prior year on the unofficial SCV Echo E-newsletter run by Allen Sullivant. Sullivant is the SCV's chief of heritage defense, appointed by Wilson.

The next day, Beirich arrived at the Montgomery, Ala., offices of the Southern Poverty Law Center, which publishes the Intelligence Report, to find her E-mail flooded with some of the most extreme examples of hard-core pornography extant, including scenes of bestiality.

"It was really quite incredible," Beirich said. "I had never seen anything like most of it." Report staffers had their suspicions about where the pornography had come from. But nothing was said publicly about the episode. There was no proof.

A Loud and Unwise Boast
That was where the matter lay until this fall, when Beirich was working on a story about the results of the SCV's July convention in Asheville, N.C. Beirich had learned that Allen Trapp, head of a major SCV geographical division and a member of the executive council, had opposed several measures that Wilson pushed.

On Aug. 22, she wrote Trapp an E-mail. "Would you be willing to talk to me about why you led your Army of Tennessee in voting against Wilson's amendments at the Asheville convention?" she asked. "I thought you might have something to add."

Forty-four minutes later, Trapp forwarded Beirich's message to John Adams, starting an exchange about leaks on Adams' SCV Dispatch (the leaks were the reason the newsletter would be shut down in September).

That evening, Trapp wrote to Adams that he was still debating whether or not to answer Beirich. In his note, he emphasized to Adams "the extent to which everything we say is public."

Adams' reply to Trapp was a remarkable one.

No board member publicly repudiated or admonished Adams. No SCV official ever disclosed to the Intelligence Report what had happened. As best as the Report can determine, no executive board member even privately took Adams to task.

But the Report was absolutely certain that Adams did, indeed, carry out the E-attack that he described to Trapp. That is because no person outside the Southern Poverty Law Center knew that Beirich had been targeted in such an attack.

At least not until John Adams told them.

The SCV Responds
The Report obtained a copy of the Adams-Trapp exchange in October, and an E-mail seeking comment was sent to Adams and the entire executive board on Oct. 31.

Within days, news of the Report's query was rapidly making the rounds. It soon became apparent that Adams' attack on Beirich was already widely known.

McNary also referenced the fact that Adams had called Kyle VanLandingham, an attorney and former head of the Tampa Historical Society who has since left the SCV, a "f--" in one of his E-mails. "I have heard the comments on Kyle VanLandingham from John's own mouth," McNary wrote. "In fact, he seems to tell it with an adolescent type of pride."

Finally, on Nov. 4, John Adams sent an E-mail to Beirich admitting his offense. He said that he had actually signed her up for only about a dozen sites, not more than 250 as he had boasted in his message to Allen Trapp, but added that "that in no way excuses my conduct." He wrote:

At the time, I viewed this as satisfyingly humorous because I equated your persistent emails to me with spam. However, I realize now that some of those sites may have contained offensive information and that it was completely inappropriate for me to have connected you to them.

I can understand how my actions in this matter may have offended your sense of honor and virtue as a lady. ... I obviously have a way to go before I measure up to the Christian character and noble example set by my Confederate ancestors.

Ten days later, on Nov. 14, SCV Commander-in-Chief Ron Wilson, who was among those who had known about the affair since August, reached a decision.

Saying that Adams' conduct "has reflected poorly on the Confederation," Wilson fired Adams from the executive board, his post as SCV Webmaster, and "from any and all other positions of trust and responsibility in the national command structure of the Sons of Confederate Veterans." (Adams' firing must be confirmed by a vote of the executive board.) For the moment, he remained Florida commander. 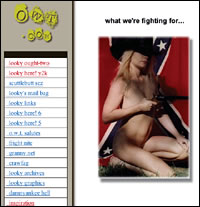 An Unreconstructed Neo-Confederate
A few days later, Adams didn't sound so repentant. Hearing that some Florida SCV members were agitating for his ouster from his state post, Adams e-mailed his followers to insist that "no whining political opportunists are going to run me off over some stupid prank I pulled against a known enemy of the SCV."

Then he went further, claiming he had actually notified the executive council about his attack on Beirich in fall 2002, not just this last August.

"They knew about the incident for over a year, and some of them even expressed 'satisfaction' with what I had done," he wrote. "Not one of them objected to it. I notified 19 National GEC [executive council] members in September 2002 of the action I took against the SPLC. How come they waited until now to spill this to the public?"

To John Shelton Reed, an emeritus sociology professor at the University of North Carolina at Chapel Hill and the famous author of many books on the South, the whole episode said something about the changing face of the SCV. The group, he said, seems increasingly political and is losing many of its best members.

"Southern gentlemen aren't what they used to be, and you can quote me on that," Reed said. "The fellows I know in the SCV would never have countenanced that. But they've already bailed out, or they're thinking about it."