In a community that has struggled to achieve its own civil rights, angry religious opposition to homosexuals is on the march 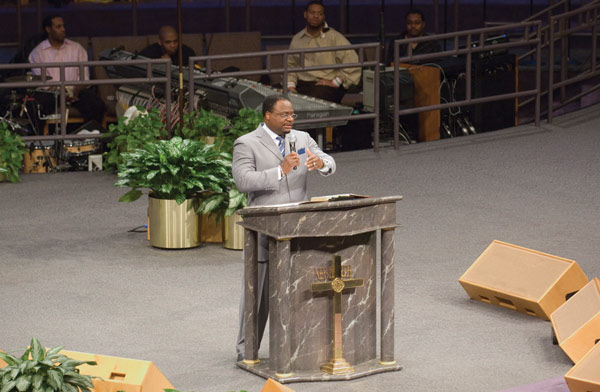 Bishop Eddie Long takes to the pulpit wearing a crisp, two-piece suit. Long's been known to dress down in tight muscle shirts and leather vests when preaching, but for this sermon it's business attire. A flock of young men from his New Birth Missionary Baptist Church near Atlanta surround Long's pulpit.

"We're raising our young boys to be just like the women," he bellows to his congregation, which today numbers more than 25,000 people. "We keep telling men to get in touch with their [sweetens his voice] sensitive self."

Almost 45 minutes into the sermon, captured on a videotape that is for sale in his church's bookstore, Bishop Long grows louder and angrier.

"The problem today and the reason society is like it is, is because men are being feminized and women are being masculine!" he roars. "You can not say, ‘I was born this way.' … I don't care what scientists say!"

The crowd erupts in "amens," laughter and clapping.

Eddie Long is just one example of a growing number of powerful, politically active African-American pastors who are increasingly aligning themselves with the white evangelical Christian leaders who have been building a religiously based anti-gay movement for more than 30 years now. Like their white counterparts, these black anti-gay preachers routinely identify the so-called "homosexual agenda" — not poverty, racism, gang violence, inadequate schools, or unemployment — as the No. 1 threat facing black Americans today. Often, they take their cues from white Christian Right hard-liners like Traditional Values Coalition chairman Louis Sheldon, who told TV pundit Tucker Carlson in January 2006 that homosexuality is "the biggest problem facing inner-city black neighborhoods." Sheldon later delivered the same message to the Congressional Black Caucus, this time accompanied by Bishop Paul Morton, a black anti-gay minister from New Orleans.

Some black ministers have been attracted to the white-dominated religious anti-gay movement by the money and power of white Christian leaders, not to mention "faith-based" grants under the Bush Administration. But it's also obvious that a segment of the black community in America has long had its own negative attitudes toward gays and lesbians. "I'm sure [black ministers] are being co-opted, but they don't need a great deal of co-optation," is how the Rev. Peter Gomes, chaplain of Harvard University, put it to the Village Voice in 2004.

"I think they come to the prejudice on their own."

Attitudes Toward Homosexuality
Public opinion among African Americans on matters concerning homosexuality is a complex phenomenon. On the one hand, African Americans are more likely than other groups to support anti-discrimination legislation protecting gays and lesbians — a reflection of their deep commitment to the ideals of equality in light of their own history of second-class citizenship.

On the other hand, polls typically show that African Americans are more likely than other groups to disapprove of homosexuality — a reflection, in large part, of factors such as the deep level of religious conviction among African Americans. As is true for many white Americans, it is not surprising that some of the most adamant opponents of gays and lesbians among black communities speak from the pulpit.

The fire of anti-gay prejudice among African Americans has been stoked by other sources as well. "Disapproval of homosexuality has been a characteristic of much of the black-nationalist ideology," Harvard African American Studies professor Henry Louis Gates wrote in The Greatest Taboo: Homosexuality in Black Communities.

Louis Farrakhan, ailing leader of the black nationalist Nation of Islam, has been a constant critic of homosexuality. "God don't like men coming to men with lust in their hearts like you should go to a female," he told a Kansas City crowd in 1996. "If you think that the kingdom of God is going to be filled up with that kind of degenerate crap, you're out of your damn mind."

The Million Man March and Millions More Movement, both Nation of Islam creations, were more heavily attended by black Christians and their ministers — Christians who found themselves very much in tune with the Nation's ideas about homosexuality — than by black Muslims like those who make up the Nation. Those tenets hold that homosexuality, along with all other "sexual perversions," originated exclusively among white Europeans. This sentiment, also popularized by black Christian ministers throughout Africa, holds that gays and lesbians, and especially black gays and lesbians, are culpable in the destruction of black civilization.

"What Farrakhan says is just a clear and pointed example of what basically underlies the theology and social actions of our African-American communities and churches," Rev. Irene Monroe, a lesbian black minister from Massachusetts, wrote in her essay, "Louis Farrakhan's Ministry of Misogyny and Homophobia."

"What's surprising," Monroe added in a recent interview, "is that the same kind of fervor that was employed in the last election to vote down same-sex marriage is the same fervor African Americans once experienced too around civil rights. It's a shame. It's amazing how hatred can motivate people."

But not all militant black leaders have expressed antipathy like Farrakhan's toward homosexual people. In 1970, the year after New York's Stonewall Riots — a watershed moment for the gay liberation movement sparked by a police raid on a gay bar frequented by blacks and Latinos — Black Panthers co-founder Huey Newton officially embraced the gay liberation movement. Newton said that homosexual people "might be the most oppressed in the society" at the Revolutionary People's Constitutional Convention that year.

"The terms 'f-----' and 'punk' should be deleted from our vocabulary," Newton later wrote. "Homosexuals are not enemies of the people." 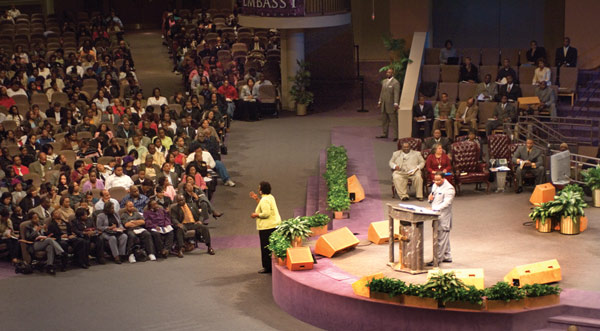 Fanning the Flames
White leaders of the Christian Right have long sought to recruit blacks into their anti-gay crusade. Conservative Christian organizations with multimillion-dollar budgets have funneled money to black anti-gay churches through programs such as the Christian Coalition's ill-fated "Samaritan Project," which aimed to raise millions of dollars for black churches that "promote family values." (The Samaritan Project disintegrated after black employees sued the Christian Coalition in 2001 for allegedly forcing black workers to enter through the back door and take their breaks in segregated rooms. The coalition settled the case out of court.)

As far back as 1994, when far-right evangelicals were revving up to do battle with the Clinton Administration, Sheldon and his Traditional Values Coalition worked with several black churches to produce the "Gay Rights/Special Rights" pseudo-documentary, designed to pit African Americans against gay Americans by presenting the struggle for gay rights as a leech upon the legacy of the civil rights movement.

Homophobic white evangelicals have also made it their business to preach directly to black audiences. Rod Parsley, the head of the World Harvest Church in Columbus, Ohio, is one of the anti-gay evangelical movement's shining stars, a man who routinely spreads such falsehoods as the idea that homosexuals die at the average age of 43 and that only 1% will die of old age. He also enjoys substantial crossover appeal among African Americans, who make up about 45% of his 12,000-member congregation.

In addition, the faith-based funding initiatives of the current Bush Administration provide financial incentives for black preachers to promote a marriage agenda that's hostile to gays and lesbians, through federal programs such as the $1.5 billion Healthy Marriage Initiative. That initiative provides funding to religious groups, mostly in inner-city areas, to promote "healthy marriages," defined as "married families with two biological parents."

After Bishop Long received a $1 million faith-based grant from the U.S. Administration for Children & Families in 2004, Esther Kaplan — a well-known commentator and author of the 2005 book With God on Their Side: George W. Bush and the Christian Right — told the Atlanta gay newspaper Southern Voice, "It cannot be bad for your career as a black minister at this point to speak out against gay marriage."

Support for anti-gay causes, of course, is far from universal among black church leaders. For instance, Rev. Jeremiah Wright, pastor of the Trinity United Church of Christ in Chicago whose congregation includes Sen. Barack Obama, has come out strongly against allowing anti-gay prejudice to become gospel in black churches. His church is one of the few that has a "Same Gender Loving" ministry for congregants. One of Wright's close associates, black theologian and public intellectual Michael Eric Dyson, also has publicly supported the gay community. 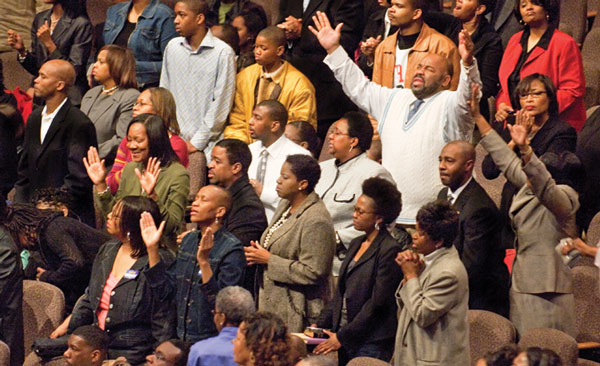 Civil vs. Gay Rights
Today, more and more black preachers across the country are picking up the idea that gay rights activists have no right to cite the civil rights movement. These preachers are now becoming the new advance guard in the hard-line Christian Right's crusade to religiously and politically condemn homosexuals. They are demonizing gays in fiery sermons and hammering the message that gay rights and civil rights are not only separate issues, but also opposing forces.

Of course, many gay and lesbian activists see it just the other way around — they believe that white evangelical hard-liners are cynically using compliant African-American pastors to serve their own purposes.

At "Justice Sunday III," a January 2006 religious conference sponsored by two white-led organizations, the Family Research Council and Focus on the Family, black ministers stood by as white evangelicals compared the "struggles" of conservative Christians to those of black Americans in the 1960s.

For his part, the late Martin Luther King Jr., generally seen as the godfather of the civil rights movement, never spoke directly to homosexuality, although Bayard Rustin, an openly gay black man and King confidant, orchestrated the 1963 March on Washington. Others who worked closely with King say that no matter what one thinks about the origins of homosexuality, all people should enjoy equality. "You can have a variance of opinion on sexual orientation," veteran civil rights activist Rev. Jesse Jackson told a crowd of Microsoft executives on Martin Luther King Day this January. "But what should not vary is protection under the law."

Yet when King's widow Coretta Scott King died last year, her memorial service was held at New Birth Missionary Baptist Church in Lithonia, Ga. — the sprawling church pastored by Bishop Eddie Long, a man who has informed his congregants that God tells homosexuals that "you deserve death." Bernice King, the youngest daughter of the King family, is a minister at New Birth and, despite her mother's opposite views, an outspoken opponent of gay rights. (Outside, members of the Westboro Baptist Church led by white anti-gay extremist Fred Phelps picketed King's funeral with signs reading, "No F--- in King's Dream.")

As the debate over gay rights continues to heat up, African-American pastors preaching anti-gay theology along the lines of Bishop Long are increasingly visible — particularly in regions with large gay populations, such as the areas around Washington, D.C., Chicago, Atlanta, Seattle and the Northeast generally. At the same time, the split between those who despise gays and others in black America is widening.

The views of those who support gay rights are probably best summed up by Coretta King, who advocated for gay rights right up to her death. In 1998, speaking on the 30th anniversary of her husband's death, she made that plain.

"I still hear people say that I should not be talking about the rights of lesbian and gay people and I should stick to the issue of racial justice," the civil rights leader's widow told her audience. "But I hasten to remind them that Martin Luther King Jr. said, ‘Injustice anywhere is a threat to justice everywhere.' I appeal to everyone who believes in Martin Luther King Jr.'s dream to make room at the table of brother- and sisterhood for lesbian and gay people."