Scott Harrison desperately tried to change his sexual orientation in various "ex-gay" ministries for eight years, three of them as a ministry leader in Southern California. 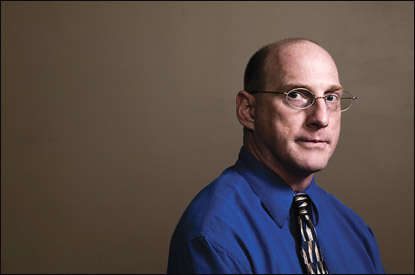 Scott Harrison was involved with the "ex-gay" movement for several years. He decided to leave when he witnessed increasing radicalization in the movement.

Scott Harrison desperately tried to change his sexual orientation in various "ex-gay" ministries for eight years, three of them as a ministry leader in Southern California. Most of his experience with ex-gay groups — Christian organizations that see homosexuality as a choice that can be changed with proper therapy — was with Living Waters and Desert Stream, two curricula of a national ex-gay network that has more than 80 branches today. When Harrison joined in 1982, he felt ex-gay ministers were then a band of compassionate outsiders attending to the first AIDS victims. But by the end of that decade, Harrison had taken note of the movement's increasing radicalism, symbolized for him by the minister at the Vineyard Christian Fellowship in San Pedro, Calif., who performed an exorcism on him in an attempt to cast out the "demons" said to be the cause of his homosexuality. Harrison finally quit the movement in 1990 after deciding he could, after all, reconcile his sexuality with his Christian faith. Today, he speaks to parents of gay and lesbian children about the dangers he sees in the ex-gay movement. Harrison says the relatively recent alignment of Exodus International, one of the largest ex-gay groups with some 120 ministries in North America alone, with anti-gay Christian "dominionists" — people who want to impose Christian rules on the secular institutions of society — has led to ex-gay ministers pursuing a hard-line message with young people that can only end in mental anguish and failure.

Scott, how did you first get involved with the ex-gay movement?
I grew up in the '60s in a conservative evangelical home, in a Baptist environment. From a young age, I learned homosexuality was not only bad but was the worst sin a person could do. It was worse than murder. For me, the two options I saw, once I realized I was gay, were to commit suicide and go to heaven or to come out as gay and go to hell. [The ex-gay movement] offered a third option.

You started attending ex-gay ministries in 1982. Those were the early days of the movement. What was a typical meeting like?
They would open with a prayer. Andy Comiskey [founder of Living Waters/Desert Stream, a neo-Pentecostal ex-gay ministry], or whoever the particular person leading the session was, would present the teaching. These teachings later became the chapters in Comiskey's book, Pursuing Sexual Wholeness.

We were separated into small groups that would stay together for the entire duration of the class. It was a three-and-a-half-hour segment every Saturday. We would break up into our small groups, and we would do a discussion.

There would be praying to break "one-flesh unions." That was the language they used to describe anything that involved having sex that they considered sinful, whether it was premarital sex or homosexual behavior or someone having sex with someone who was in the occult.

The small groups were meant to create Platonic, healthy, same-sex relationships with other Christians. And so you got really close to these people who were in the group. You'd call them every day just to see how they were doing. It was really similar to a recovery group. Homosexuality was viewed as a temptation, not as an orientation.

Back in the 1980s, many Christian churches wanted nothing to do with ex-gay ministries. They saw them as shameful. What was your experience?
[The Vineyard Christian Fellowship in San Pedro, Calif.] was completely different from any evangelical church you've ever been to. There was a strong emphasis on social justice issues — feeding the homeless and doing whatever you could to help people. There was a strong emphasis on doing the things Jesus did and walking the talk.

So the first ex-gay movements considered themselves progressive?
Yes. This was at the beginning of the AIDS epidemic. If you were struggling with feelings of being attracted to the same sex, regardless of whether you accepted yourself as gay or lesbian, you often were asked to leave your church. People tried to cast demons out of you if it was a Pentecostal or charismatic church. Some said that just through reading the Bible would make you change.

So Desert Stream comes along, and it was fairly innovative. Comiskey had a marriage and family therapy degree. He was versed in psychology. [The program] integrated his brand of psychology with theology. It was seen [in Desert Stream] that sexuality was a gift from God, but certain expressions of sexual behavior are not proper and are not blessed by God. The message was a mixed message — it had progressed from a view you heard in evangelical churches, that homosexuals are all going to hell. It was a message that was hopeful, in a sense.

In 1987 you became an ex-gay minister. Why?
I still believed that change was possible or I wouldn't have done it. I didn't believe change was an easy process. People would have said, if you asked them in private, [that] the option was one of celibacy, as opposed to accepting oneself as gay and lesbian. When [ex-gay ministers] talked about change at that time, they were talking about behavior modification. A person submitted his or her life to God and believed in the power of Christ to transform all elements of his or her life. It was a hope that was held out there, that [one's] desires would become more and more heterosexual. I dated [women] a little bit but it just didn't happen.

A minister in your church performed an exorcism on you to root out your homosexuality. How did that happen?
There was a particular associate minister who was pretty out there. But the problem was he was also extremely intuitive. He would know stuff about you without you ever having told him.

When you're coming from a perspective that you believe God can give messages to people, words of prophecy, then it's very easy to become prey. This guy got a team of people together. One of the aspects that is pretty strong in Vineyard, still, is that they believe that people can be "demonized." Not meaning that a person is fully possessed by Satan, but that a person has given him or herself over to Satanic strongholds in his or her life, so that it may take an exorcism to release the various demons that this person has given over their lives to.

What happened as you went through it?
It was very intense, dramatic, group prayer. It lasted at least three hours. At the end, I was drenched in sweat. There were some real areas of psychological wounding. All I can really describe it as — because of how it happened and the incorrectness of the theology — is that it felt like a spiritual rape to me.

I'm not saying he [the minister] didn't have good intentions, but it amounted to a spiritual rape. The exorcism occurred that afternoon, and then we ran into the evening church service. I've got hearing issues. I'm fairly hard of hearing; I had hearing aids at the time. This person was convinced that God had given word that I was supposed to give up my hearing aids, that God would heal my hearing. He did this in front of 300 people. I was psychologically vulnerable. I didn't follow my better hunches. Even though it happened over 20 years ago, it's hard to still not blame myself. … I knew there wasn't a demon of homosexuality.

Nowadays, you speak to groups like PFLAG, Parents and Friends of Lesbians and Gays, about ex-gay ministries. What do you tell them?
I always start out by saying what I am not doing is trying to bash people or say negative things about anyone who's involved with these ministries as a person. My goal is to educate people [as to] what their theology is, what they do and also what some of the things I see as dangerous [are] about the movement, both when I was involved and currently.

There's psychological damage when change doesn't occur, when sexual orientation remains homosexual. I certainly heard stories and knew people who committed suicide. I've seen what I believe is a higher incidence of risky behavior and alcohol and drug use among a lot of people who go through an ex-gay ministry. A lot of it is because of spiritual conflict that emerges going through that, feeling betrayed by God, feeling betrayed by the church.

Since you left in 1990, the ex-gay movement has become much more political, hiring lobbyists and meeting with lawmakers. How did this come about?
Around 1997, the ex-gay movement started to get funding from Focus on the Family [a huge Christian Right group led by James Dobson and based in Colorado Springs, Colo.] and from what I'll call other fundamentalist Christian organizations. Exodus International began receiving a lot of their funding from these organizations. As a result, [the ex-gay groups] began to tell a different story. Ex-gays became a vital part of the battle against gay and lesbian civil rights in society.

At the Exodus Revolution ex-gay conference this summer, you saw a speech by Michael Brown in which he encouraged people to "give up their lives" in the fight against homosexuality. What do you think of that?
When you have a keynote speaker like Michael Brown, to me that's unacceptable. It's preaching a message of Christians not just simply opposing gay civil rights and believing a spiritual revival is necessary for this country, but actually calling on Christians to lay down their lives in a spiritual revolution to set up civil laws based on one extreme interpretation of biblical laws from the Old Testament [that calls for the death penalty for homosexuals]. It's Christian Reconstructionism [a doctrine that calls for imposing harsh Old Testament laws on civil society], Christian dominionism. It's abhorrent, and it's dangerous, not just for LGBT people but for our entire society. Because if civil laws are based on [Brown]'s interpretation of the Bible, it's not going to be a democratic society.

What's the problem with that message?
I don't think that's healthy for anyone, but especially not for high school students. Teenagers are idealistic. They're going to grab for that, believing they can actually change their sexuality, when we have plenty of evidence showing it's not possible. What's going happen when they don't change? More youth suicides, more youths engaging in risky behaviors, feeling betrayed by the church and by God and giving up on their faith. If I'd heard that message as a teenager, I don't know if I'd be here today.

I think the healthier option is to encourage them to accept themselves and find ways of maintaining a faith relationship while encouraging relationships that are healthier than promiscuity. For some people, that might be a monogamous same-sex relationship. For other people it might mean that they are celibate. Speaking from my own experience, I never witnessed anybody [in the ex-gay movement] who would acknowledge to me privately that they did not still have attractions towards people of the same sex. I can't tell you how many people come out of the ex-gay movement with their faith wrecked and they have to rebuild it from scratch.