Early one Saturday morning last November, armed men on motorcycles hounded Latino immigrants into the desert around Cave Creek, Ariz., a rustic town 20 miles north of Phoenix. It was the first day of operation "Adios Illegals," a campaign to scare off immigrants at day-labor sites organized by the American Freedom Riders, a Phoenix-based motorcycle group that held its first meeting last summer and has since grown to 12 chapters in eight states.

The belligerent tactics and rapid expansion of the American Freedom Riders represent a much larger lightning storm of militant xenophobia that is crashing over the county and swiftly gathering strength. The Intelligence Project has identified 144 nativist extremist groups active across 39 states in recent months. Most of these organizations — nearly 100 of them — have taken form since April 2006. Their rhetoric and their methods grow ever more extreme.

Throughout the morning in Cave Creek, the American Freedom Riders played cat and mouse with immigrants clustered on street corners and in front of convenience stores. The sight of the advancing bikers, some of whom were strapped with handguns, scared the immigrants into seeking cover in nearby dry washes. "They scattered like cockroaches in all directions," American Freedom Riders leader "Buffalo" Rick Galeener later boasted in a letter published in the Sonoran News. "They simply ran, like the criminals they are!"

In one instance, a two-ton truck flying a huge American flag roared into the parking lot of the Good Shepherd of the Hills Episcopal Church, where 20-30 Latinos were gathered at a day labor shelter provided by the church. The truck drove in tight circles around the immigrants, trailed by about 20 motorcycles. Half the immigrants fled. According to Rev. Glenn Jenks, rector at Good Shepherd, the bikers cheered and shouted, "Go back to Mexico!" Later the members of the American Freedom Riders surrounded the church, videotaping and photographing any Latinos who remained, and vowing to come back until Cave Creek is "illegal alien-free." 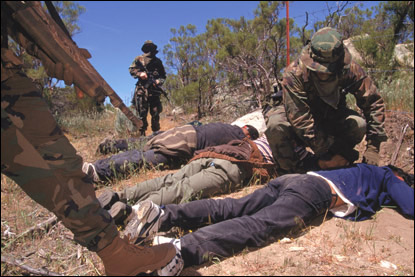 American vigilantes have taken on an increasingly predatory look. Intimidation, threats and worse are now normal facts of life on the border.

Paranoia and Sniper Teams
The groups identified by the Intelligence Project as "nativist extremist" groups target people, rather than policy. They do not limit themselves to advocating, even in forceful terms, for stricter border security, tighter population control, or tougher enforcement of laws against hiring illegal immigrants.

Instead, they go after the immigrants themselves.

Their strategies include vigilante border patrols; conspicuous surveillance of apartments and houses occupied by Mexicans and Central Americans; publicizing photos and home addresses of "suspected illegal aliens"; and harassment and intimidation of Latino immigrants at day-labor sites and migrant-worker camps. Their rhetoric is frequently warlike.

"An army of illegal aliens, including criminals, drug smugglers, and terrorists, is invading our country," declares the Indiana Federation for Immigration Reform and Enforcement.

"America is being destroyed by a modern version of Genghis Khan's army," according to the Emigration Party of Nevada, whose leader, Donald Pauly, has called for the Department of Homeland Security to station "sniper teams" on the border and suggested that all Mexican women should be forced to undergo sterilization after having their first child.

Increasingly, the ideology of nativist extremist groups is shot through with paranoid conspiracy theories strongly reminiscent of the antigovernment militia movement of the 1990s.

"You need to understand that WE ARE AT WAR RIGHT HERE IN AMERICA," reads the recruiting literature of United Citizens of America, a group based in Omaha, Neb. "We are being invaded by a foreign country and we are being betrayed from within. Our government, from top to bottom, is being controlled by global elites. They have infiltrated our government at ALL levels."

According to the Minutemen Midwest, a group based in Harvard, Ill.: "There is a conspiracy afoot to merge the U.S. and Mexico. This heinous ongoing treason has been engineered by an entrenched cabal of legislators, courts, military brass, and government employees embedded at all levels of the executive branch, constituting a 'Shadow Government,' who are working to dismantle this country in plain sight."

Rogue Minutemen
Though most heavily concentrated in Arizona, California and Texas, nativist extremist groups are active in all regions of the United States. Many of the groups in non-border states are local chapters of either the Minuteman Civil Defense Corps or the Minuteman Project. These separate, competing nationwide organizations both emerged from the original month-long Minuteman "civilian border patrol" operation held in Cochise County, Ariz., in April 2005.

Combined, the local chapters of the Minuteman Civil Defense Corps and Minuteman Project comprise 57 of the 144 nativist extremist groups identified by the Intelligence Project. These Minuteman chapters raise money for their parent organizations and muster volunteers for vigilante border actions. Many also hold protest actions or conduct "surveillance ops" at day-labor sites in their home cities. In states where it's allowed by law, their members openly carry firearms.

The Minuteman Civil Defense Corps and Minuteman Project also have spawned a slew of imitators, spin-offs and splinter groups that have no official affiliation with either national Minuteman organization.

These rogue Minuteman outfits include the Antelope Valley Minutemen, whose leader, Frank Jorge, writes on his website: "We have a right, and an obligation, to defend our country, our homes, and our families not only from this invasion, but also from the very Government that is precipitating this treasonous act."

The most radical and widespread rogue Minuteman group is the so-called Minuteman of One, which consists of at least three chapters in Arizona, two in California and one in Texas. More of an extremist creed than a hierarchal organization, Minuteman of One was founded by Fred Puckett, who was expelled from the original Minuteman operation for, among other things, violating rules against openly carrying assault rifles (the original Minuteman Project restricted volunteers to handguns only).

"We don't have no by-laws, we don't have nothin'," Puckett told a Phoenix television news crew last April. "We go out in two-man teams and we hit them like we did 40 years ago in Vietnam."

Puckett has since distributed videos of himself and other Minuteman of One members displaying and shooting a small arsenal of assault rifles, ransacking vehicles, and shouting death threats at immigrants fleeing in the desert.

'Go vigilantes!'
On Jan. 28 of this year, four heavily armed men wearing military-style berets and camouflage fatigues ambushed a pickup truck carrying 12 illegal immigrants in a farm field near Eloy, Ariz. The assailants shot and killed the driver and wounded one of the passengers. The survivors described the shooters as three white men and one Latino who spoke limited Spanish.

The attack near Eloy occurred in the midst of a month-long flurry of similar ambushes in southern Arizona, in which six victims were killed, six were shot and wounded, and 18 were robbed at gunpoint in four separate incidents.

But the Eloy ambush stood out because it lacked any characteristics of typical borderland violence committed by bandits or rival smugglers. No one was robbed in the Eloy ambush, there were no drugs in the truck, and no one was kidnapped (rival immigrant smugglers, or "coyotes," frequently steal each other's human cargo). Also, three of the men were white, which is exceedingly rare for coyotes or border bandits.

The incident remains under investigation. No arrests have been made, and there is no hard evidence the killers were acting as anti-immigration vigilantes. Even so, Jeff Schwilk, the founder of the San Diego Minutemen, a highly active and aggressive new group that targets migrant worker camps in semi-rural canyons in Southern California, openly celebrated the murders.

"In America, we call incidents like that 'cleansing the gene pool,'" Schwilk declared in an E-mail to his group's members.

Online public forums hosted by various nativist extremist groups are rife with calls for more violence and support for the Arizona killers. "I really hope it IS pissed off Americans who are taking justice into their own hands, doing what the Border Patrol and the National Guard ARE NOT ALLOWED to do," a member of Save Our State posted to a public online forum in early February. "Go vigilantes! Where can I send a check?"

Mines and Machine Guns
Unlike the Ku Klux Klan or neo-Nazi organizations, the ideology of most Nativist extremist groups is not explicitly racist.

Nine of the groups identified by the Intelligence Project as "nativist extremist" also operate as hate groups. They are listed as hate groups because they disparage all Latinos on a racial basis, regardless of immigration status, or because they plainly endorse white nationalism, sometimes prophesizing impending race war.

"Ethnic cleansings and demographic warfare are being waged against European-Americans by Mexico and its proxies in the U.S. under the cloak of protecting the 'human rights' of criminal invaders," states Rescue Without Borders, a vigilante militia based in Boulder, Colo., that is identified by the Intelligence Project as both a nativist extremist group and a hate group. "The U.S. is third on the list to end White rule after Rhodesia and South Africa. First, the globalists must create a non-White majority through illegal immigration, diversity lotteries, visas, and a guest worker (invader) program… . Political correctness and 'diversity training' are the AIDS and HIV of White nations."

While only a few nativist extremist groups deal in such unvarnished white supremacist ideology, most of them are playing a role similar to that of traditional hate groups in the raging national immigration debate. They are interjecting wacky conspiracy theories, disseminating false statistics about "criminal" immigrants and the problems they create, blaming and targeting Latino immigrants as individuals, and promoting direct intimidation, mean-spirited harassment, and even murder.

The online forum hosted by the Minuteman Civil Defense Corps, the single largest nativist extremist organization in the country, with 34 chapters in 27 states, publicized several calls last November for the U.S. government to place land mines and machine gun towers on the border. One Minuteman advised other members to keep a supply of quick lime on hand to hasten the decomposition of corpses. Another summed up his policy recommendations most succinctly: "Shoot, shovel, and shut up."