Updates on Extremism and the Law 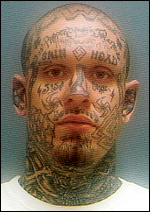 Jan. 7, 2008
A Salt Lake City woman pleaded guilty to obstruction of justice for concealing a prison jumpsuit worn by an escaped convict who had allegedly just murdered a corrections officer. Trisha Tower, who was later sentenced to a year in jail, was a friend of Curtis Michael Allgier, a tattooed white supremacist who faces a capital murder trial for the killing of Stephen Anderson during an escape from a hospital.

Jan. 30, 2008
A white supremacist inmate of Florida's Washington County prison was convicted of murdering his cellmate because the man was black and had raped a white woman. Prosecutors said they would seek the death penalty for Johnny Reed, described by authorities as allied with the Aryan Brotherhood prison gang, but a jury later recommended life. A final decision is up to the judge in the case.

Feb. 1, 2008
San Quentin, Calif., inmate Joseph William Verducci was arraigned in the 2007 death of a man shot through the window of a Vallejo bar. Officials said Verducci was a member of the Family Affiliated Irish Mafia (FAIM), which has ties to the racist Aryan Brotherhood prison gang. FAIM members were arguing outside the bar where Jose Corona was sitting when the shot went off that killed him.

Feb. 2, 2008
Mariusz Wdziekonski was charged with felony criminal damage and hate crimes after confessing to desecrating 57 headstones at a Jewish cemetery in Norridge Park Township, Ill. Officials said Wdziekonski, 21, had immigrated four years earlier from Poland, where he was involved in the neo-Nazi movement, and joined a group in America that he identified as National Socialist Movement 88.

Feb. 12, 2008
A state appeals court ruled that the death sentence for Wade Lay — a man who with his son murdered a Tulsa, Okla., guard during a 2004 bank robbery meant to raise money for guns — was justified. An apparent militia sympathizer who acted "in resistance to tyranny," Lay had planned to use the guns to murder those he held responsible for the 1993 deaths of some 80 Branch Davidians in Waco, Texas.

Feb. 14, 2008
The U.S. Marshals Service arrested Jason Gregg, a member of the racist skinhead Blood & Honour gang, for allegedly firing shots at an Ohio state police officer and another person in Thornville. Authorities said the 2006 attack occurred while the agent was infiltrating the gang as part of an FBI task force, but gave no other details.

Another man, Jon Carr, was earlier arrested on the same charges.

March 8, 2008
"Buffalo" Rick Galeener, co-founder of the anti-immigrant Riders United for a Sovereign America and one of the most radical nativists in Phoenix, was charged with misdemeanor indecent exposure for showing his penis to a Latina woman who says he had earlier called her racist names. If the woman's young son had also seen Galeener expose himself, police said, he would have faced a felony charge. 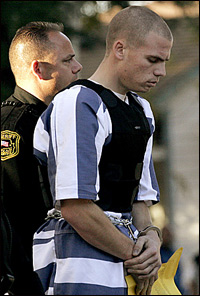 March 27, 2008
The capital murder case against Brendt Anthony Volarvich for killing California Highway Patrolman Andy Stevens on a highway near Woodlands in 2005 went to a jury amid defense claims that drugs were partly responsible. Prosecutors said Volarvich, who had ties to Sacramento's United Society of Aryan Skinheads, was involved in a murder-for-hire plot when he was pulled over by Stevens.

March 31, 2008
Portland, Ore., resident David Rainey was arraigned on attempted aggravated murder, arson and witness-tampering charges — the same charges brought against another man arrested the week before. Rainey and Daniel Davis, both linked to the European Kindred prison gang, had allegedly terrorized a 29-year-old robbery victim with firebomb attacks to keep him from testifying against them.