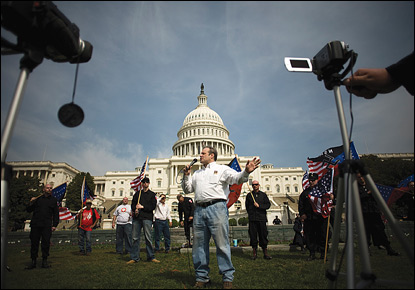 Neo-Nazi radio host Hal Turner announced July 30 that he was shutting down his weekly Internet program after eight years of broadcasting calls for the assassination of public officials and the mass murder of non-whites and Jews. "I am leaving public life because its impact upon my family can no longer be justified," Turner declared in an E-mail to his listeners. On his website, he sketched out cryptic future plans: "Instead of telegraphing my thoughts in public, I now move to the shadows with my brethren to take sudden, dramatic, irreversible, direct action."

Skeptics noted it wasn't the first time Turner has claimed to be terminating his radio programming. In May 2004, he announced the show was finished because he'd run out of funds. Six months later, he was back. Last January, Turner claimed he was ending the show and quitting the white supremacist movement after the Intelligence Report published evidence that he was a paid FBI informant. A few days later, Turner resumed broadcasting from his New Jersey home.

Not long after Turner's latest farewell, Georgia white supremacist Ed Fields declared that he's folding his 50-year-old newspaper The Truth At Last (formerly The Thunderbolt). The 86-year-old Fields explained simply that it was time to retire.

After launching his paper in 1958 as the organ of the violently pro-segregationist National States Rights Party, Fields continued to publish as he pushed further and further into the ranks of the white supremacist movement, including stints as the grand dragon of a Ku Klux Klan chapter and leadership roles with the neo-Nazi groups National Alliance and National Vanguard. Fields most recently joined the European-American Unity and Rights Organization, the relatively inactive group led by former Klan boss David Duke.

Shortly after Fields announced his retirement, Duke promised that all The Truth At Last subscriptions would be transferred to The David Duke Report, effectively doubling his publication's readership.