For years, Hawaiians have avoided talk of race and hate crimes. That doesn't mean the island state doesn't have a problem

Celia Padron went on a Hawaiian vacation last year, lured by the prospect of beautiful beaches and friendly people. She, her husband and two teenage daughters enjoyed the black sand beach at Makena State Park on Maui. But a Hawaiian girl accosted her two teenage daughters, saying, "Go back to the mainland" and "Take your white ass off our beaches," says Padron, a pediatric gastroenterologist in New Jersey.

When her husband, 68 at the time, stepped between the girls, three young Hawaiian men slammed him against a vehicle, cutting his ear, and choked and punched him, Padron says. Police officers persuaded the Padrons not to press charges, saying it would be expensive for them to return for court appearances and a Hawaiian judge would side with the Hawaiian assailants, the doctor contends.

"There is no doubt in my mind [the attack] was racially motivated," she adds.

With no known hate groups and a much-trumpeted spirit of aloha or tolerance, few people outside Hawaii realize the state has a racism issue. One reason: The tourism-dependent state barely acknowledges hate crimes. That makes it hard to know how often racial violence is directed at Caucasians, who comprise about 25% of the ethnically diverse state's 1.3 million residents. Those who identify themselves as Native Hawaiian — most residents are of mixed race — account for nearly 20%. 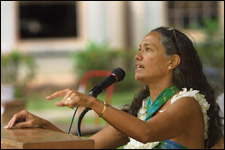 Hawaii has collected hate crimes data since 2002 (most states began doing so a decade earlier). In the first six years, the state reported only 12 hate crimes, and half of those were in 2006. (All other things being equal, the state would be expected to have more than 800 such crimes annually, given the size of its population, according to a federal government study of hate crimes.) There was anti-white bias in eight of those incidents. But that doesn't begin to reflect the extent of racial rancor directed at non-Native Hawaiians in the Aloha State, especially in schools. For example:

Anti-white sentiments such as these have been more than 200 years in the making. The pivotal event occurred when American and European businessmen, backed by U.S. military forces, overthrew Hawaii's monarch in 1893 and placed her under house arrest two years later. The United States annexed the islands as a territory in 1898, and they became a state in 1959.

Little wonder then that as Hawaii prepares to observe the 50th anniversary of becoming the 50th state on Aug. 21, it will a muted celebration, devoid of parades or fireworks.

Classroom Warfare
Tina Mohr has lived in Hawaii for 25 years. She has Native Hawaiian friends. But in the 2003-04 school year, her twin blond-haired daughters, aged 11 at the time, began getting harassed by Native Hawaiian kids at their school on the Big Island. "Our daughters would come home with bruises and cuts," she tells the Intelligence Report.

One of her girls was assaulted twice in the same day. In one scuffle, she had her head slammed into a wall, and her attacker continued to threaten her. Her daughter suffered a dislocated jaw and had headaches for five weeks, Mohr says.

The torment continued in the summer between 5th and 6th grades. Native Hawaiian girls stalked and threatened her daughters and yelled "f------ haole" at them. Midway through the 6th grade, Mohr began to home-school her daughters.

She filed a complaint with the civil rights division of the U.S. Department of Education in 2004. It was only recently, on Dec. 31, 2008, that the division finally released its report. The report concluded there was "substantial evidence that students experienced racially and sexually derogatory name-calling on nearly a daily basis on school buses, at school bus stops, in school hallways and other areas of the school" that Mohr's children attended.

The epithets included names such as "f*****g haole," "haole c**t" and "haole w----," according to the report. Students were told "go home" and "you don't belong here." Most of the slurs were directed by "local" or non-white students at Caucasians, especially those who were younger, smaller, light-skinned and blond.

The report also concluded that school officials responded inadequately or not at all when students complained of racial harassment. Students who did complain were retaliated against by their antagonists. "They learned not to report this stuff," Mohr says of her own daughters.

The Hawaii Department of Education settled Mohr's complaint with a lengthy agreement in which educators promised to take various steps to improve the reporting, investigating and eliminating of student harassment in the future. Today, Mohr's daughters are again attending the school where they used to have trouble. They haven't been assaulted, but one was threatened on a school bus earlier this year.

Racial Legacies
The resentment some Native Hawaiians feels toward whites today can be chalked up in part to "ancestral memory," says Jon Matsuoka, dean of the School of Social Work at the University of Hawaii. "That trauma is qualitatively different than other ethnic groups in America. It's more akin to American Indians" because Hawaiians had their homeland invaded, were exposed to diseases for which they had no immunity, and had an alien culture forced upon them, he says. Stories about the theft of their lands and culture have been passed down from one generation to the next, Matsuoka adds. (One difference now, of course, is that Native Hawaiians in Hawaii are far more numerous than American Indians are in their own ancestral regions, where the Indians remain politically weak and largely marginalized by the far larger white population.)

Racial violence directed at whites in Hawaii, while deplorable, is minor compared to the larger issues underlying it, Matsuoka says. The Hawaiian spirit of aloha "is pervasive, but you have to earn aloha. You don't necessarily trust outsiders, because outsiders [historically] come and have taken what you have. It's an incredibly giving and warm and generous place, but you have to earn it," he says.

Further fueling the resentment that some Native Hawaiians feel for outsiders are attempts by the latter to usurp entitlement programs given the former to redress previous wrongs. In recent years, non-native residents have used the courts to try and rescind these entitlements on grounds that they are racially discriminatory and violate the U.S. Constitution.

Retired professor and "anti-sovereign" white activist Kenneth Conklin and others prevailed in a lawsuit in 2000 that challenged a requirement that trustees of the Office of Hawaiian Affairs — OHA — be of Native Hawaiian descent. OHA oversees huge tracts of lands that the United States took from Hawaii when it annexed the islands as a territory, and collects revenues from them for programs that benefit Native Hawaiians.

The state government was going to sell 1.2 million acres of these lands to developers for two state-sponsored affordable housing projects when OHA and four Native Hawaiian plaintiffs sued to stop the deal. A state court sided with the government, but the Hawaii Supreme Court reversed in favor of the plaintiffs. This March 31, the U.S. Supreme Court ruled unanimously that the Hawaii high court erred and sent the case back for further action.

There also was an unsuccessful legal challenge to the Hawaiian Homes Commission Act, passed by Congress in 1921. The act allows a Hawaiian agency to make 99-year leases at $1 per year to Native Hawaiians (but not other residents) for authorized uses on lands ceded to the United States when it annexed Hawaii. More than 200,000 acres of land were designated for uses such as homes and ranches.

One of the more protracted legal battles involved a lawsuit filed in 2003 by a non-Native Hawaiian student against the hugely wealthy and influential private Kamehameha Schools. Kamehameha operates three campuses for the benefit of children of Hawaiian ancestry. The student's attorneys contended that violates civil rights laws. As the U.S. Supreme Court was about to announce last year whether it would hear the case, Kamehameha paid $7 million to settle it out of court.

'A Hateful Place'
A violent incident with racial overtones in 2007 near Pearl Harbor prompted a good deal of soul searching about race in Hawaii. A Native Hawaiian man and his teenage son brutally pummeled and kicked a Caucasian soldier and his wife near Pearl Harbor after the soldier's SUV struck the other man's parked car. The son shouted "f------ haole" while attacking the soldier. The husband and wife suffered broken noses, facial fractures and concussions. A prosecutor said the assault was a road-rage incident, not a hate crime. But it generated much debate on newspaper websites and blogs about the use of the word haole and whether whites are the targets of racism in Hawaii.

"It is a hateful place to live if you are white," wrote a woman on one Hawaii website's comments section. A Hawaii native who is white wrote, "Racism exists in Hawaii. My whole life I've never really felt welcome here." A sailor stationed at Pearl Harbor added that "this island is the most racist place I have ever been in my life."

Other white residents, however, wrote that they had had no such experiences. And many people maintained that arrogant mainlanders are the most likely to incur natives' wrath. It's their "cultural inability to be humble [that] is a huge contributing factor in a lot of violence against them," one person wrote. "There is a high degree of arrogance and lack of respect that mainlanders exhibit," added another.

A Hawaiian Studies professor at the University of Hawaii, Haunani-Kay Trask, is one of the most caustic critics of whites in the islands. In her 1999 book, From A Native Daughter, Trask wrote: "Just as … all exploited peoples are justified in feeling hostile and resentful toward those who exploit them, so we Hawaiians are justified in such feelings toward the haole. This is the legacy of racism, of colonialism."

Trask's opposite number is Conklin, the "anti-sovereignty" white activist who has lived on Oahu for 17 years and says he loves Hawaii's culture, spirituality and history, but is labeled a racist by some of his detractors. He wrote a book entitled Hawaiian Apartheid: Racial Separatism and Ethnic Nationalism in the Aloha State.

"Here in Hawaii, there is no compulsion to speak out on racist attacks. There are all these hate crimes and violent things happening to white people and you don't hear sovereignty activists speaking out against it," says Conklin, who manages a massive website on Hawaiian issues. "The violence has been going on for years and it's always been hush-hush."

State and Race
It's against this backdrop that Hawaii approaches its 50th anniversary of statehood. The non-celebration will consist largely of educational events at various venues. Iolani Palace won't be one of them. Once home to Hawaii's monarchy and where the last monarch was imprisoned after her government was overthrown, the palace is a potent symbol of anti-statehood — and anti-white — sentiment.

Republican state Sen. Sam Slom learned that the hard way. Although Statehood Day is a holiday in Hawaii, there were no celebrations for about 10 years, until he organized one in 2006 at the palace. He and others were confronted by demonstrators shouting racial epithets. Slom, who is Caucasian and has lived in Hawaii since 1960, said the 30 to 40 "hard-core" protesters intimidated a high school band, which left early, as well as some spectators.

The 50-year anniversary events figure to be "soft celebrations" aimed at defusing sovereignty passions, Slom says. "It is a divisive wedge that some people have exploited," he says. "There are people who have made it a racial thing. [But] the vast, overwhelming majority are proud to be United States citizens."

Still, a statehood commission planning commemorative events opted not to re-enact the phone call to the Territorial House of Representatives meeting at Iolani Palace in 1959 informing representatives that Congress had voted in favor of Hawaiian statehood. Commission member Donald Cataluna strongly opposed a reenactment, according to the Honolulu Advertiser, saying he "didn't want any blood to spill."

That won't completely mollify sovereignty activists, Slom predicts. "There will be protests, there's no question about it."