A nativist film about the U.S.-Mexico border comes back to life, thanks partly to the Federation for American Immigration Reform 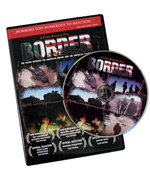 The lack of drama captured on the Mexican border in the documentary film "Border" is more than made up for by melodrama sparked when its creator, Chris Burgard, travels in 2006 to Washington, D.C. to wander the halls of Congress.

First, he interviews California Republican Congressman Dana Rohrabacher, who once called a proposed guest worker program "the foul odor that's coming out of the United States Senate" and argued that it wouldn't really be a problem if all the Mexican farmworkers in America were rounded up and deported because prisoners could pick the nation's fruits and vegetables. True to form, Rohrabacher spouts off about undocumented immigrants using emergency rooms "as if it's their HMO" and overcrowding schools at the expense of "ordinary kids." Next, Burgard arrives at the office of House Democratic Leader Nancy Pelosi. He tries to open the door and — oh no! "It's locked. Oh my lord," Burgard exclaims incredulously, although he had no appointment. And then, bitterly: "Well, it's been a big day. They took down Tom DeLay today."

That comment dates "Border." Burgard shot his film in 2005 and 2006, and it began screening in early 2007. Burgard was briefly a nativist media darling, interviewed by right-wing TV personalities like Lou Dobbs, Glenn Beck and Sean Hannity. Burgard also promoted his film by appearing, among other places, at a screening in Hazleton, Pa., known for targeting undocumented immigrants with harsh local laws.

Now, the film is gaining new life following its release on DVD in November. The Federation for American Immigration Reform (FAIR), which is listed as a hate group by the Southern Poverty Law Center, recently offered a free copy of the "impartial" documentary to anyone contributing $25 or more before the end of February. It's no surprise, given FAIR's politics, that the film amounts to a defense of nativism.

Chris Simcox is one of many border vigilantes profiled in "Border."

In the movie, Burgard joins forces for a month with Chris Simcox and the volunteers of Simcox's Minuteman Civil Defense Corps (MCDC), an anti-immigration vigilante organization that conducts "citizen border patrols" in states that include Arizona, California, New Mexico and Texas. Simcox presents himself as a persecuted victim in his interviews with Burgard. "My phones have been tapped for years," Simcox asserts at one point.

One can't escape the feeling in this film that for many of Simcox's MCDC volunteers, traipsing around on the desolate border is sort of an adult military fantasy camp. There is talk of conducting "reconnaissance," holding a "mission debriefing" and taking the "troops" into the field. In one nighttime segment, Burgard, whispering excitedly, asks a volunteer, "What did you think of those guys running out in the cold bushes like that?" The hushed response: "It's pretty gnarly. It's pretty John Wayne."

It's an apt image. Burgard and some of the MCDC volunteers wear cowboy hats and ride horses. Apparently swept up in the Wild West mystique of the American Southwest, Burgard at one point says that President Bush is "fixin' to make a speech on the war on terror." According to his bio, Burgard is a native of Wisconsin, the "son of a cop and a cowgirl" who was "riding horses before he could walk." He is also a former ballet dancer and movie stuntman who, before delving into the nativist movement, was probably best known as Matthew Broderick's dance double in the 1986 hit movie "Ferris Bueller's Day Off." Now he lives on his ranch in Southern California with cats named Smith and Wesson.

Although FAIR and various border vigilante groups herald "Border" for its supposed accuracy and neutrality, in fact the film relies heavily on dubious statistics and the undocumented claims of anti-immigration zealots.

For example, Madeleine Cosman is featured prominently, talking a blue streak about exotic diseases and immigrants. Cosman — who died in 2006 — was the primary source of a grossly erroneous statistic that CNN immigrant-basher Lou Dobbs reported concerning the number of new leprosy cases in the United States due to immigration. (Although he stood by his discredited story, Dobbs later claimed it had come from elsewhere and called Cosman a "whack job.")

For a statistic on spending in California on illegal immigrants, Burgard cites the far-right Washington Times as his source. For figures on profits from smuggling Chinese nationals into the United States, his source is Dobbs, whose tendentious treatment of evidence has made him a major purveyor of nativist falsehoods.

In what is supposed to be a dramatic climax to the film, Burgard and his associates wait at night to watch the action at a particularly dangerous border crossing point. They spot a group of 29 individuals walking toward the border, then a second group of 19, including one who is armed. The music reaches a frenetic pitch, but the ghostly images of the border crossers aren't scary, just surreal. There is no confrontation, yet long after they're gone, Burgard is still whispering.

For all of this silliness, there are some sympathetic people in "Border."

Certainly the owners of large ranches along the border who deal with dead bodies and serious property damage because their land is on a migration route are suffering real hardships. Not to mention the Mexicans trying to sneak across. The film depicts photos of some of their corpses baking in the sun.

One of the more interesting segments of "Border" occurs when Burgard and a few Minutemen come across four forlorn Mexican men hunkered down in the shade. The men say they've gone without water for two days. The Americans offer them some and call the Border Patrol.

One of the Minuteman volunteers is moved by the Mexicans' plight. "I don't know if I feel bad for these guys or not," he says at first. But then he reconsiders: "I feel pretty horrible. I mean, all they want to do is work. They come here, they have nowhere to go once they get here."

Burgard has little use for such mushy-headed sentimentality. Less than a minute later, the camera is back to Simcox. "One hundred nine people with known ties to terrorist groups were caught coming across this border last year," he intones. Simcox offers no evidence for his eyebrow-raising claim, and Burgard doesn't press him for any. "Border Patrol catches one in four. How many of them get in?"