During the 1920s, Marcus Garvey embodied the "back to Africa" movement, promoting black separatism and unity as the path to black empowerment. Now, a white nationalist group has adopted Garvey's idea — only with markedly different motivations.

The Center for Perpetual Diversity (motto: "Save Europe"), a Maryland-based organization that advocates preserving the white race through racial segregation, launched its "Motherland Project" to try to get blacks to leave the United States. Or, in the center's more genteel phrasing, "[The director] of the Center's Motherland Project will find African American pioneers who want to reestablish their roots in Africa. This will hopefully be the beginning of a large project that will reverse the African scattering." 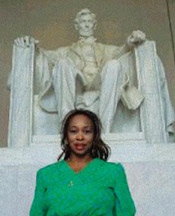 The center says that it will seek grant money to defray relocation costs for people who want to take part in the program. Individuals are also welcome to send a check to help with the "repatriation effort." The center, however, hasn't exactly taken off. The phone number listed on the site is not working. And no one responded to an E-mail from the Intelligence Report seeking comment.

The Motherland Project purports to have the best interests of black people at heart. And, indeed, according to its website, it's run by a 52-year-old African-American woman identified as Sharity Ross-Petit, who is pictured standing in front of the Lincoln Memorial in Washington, D.C., but about whom no other information is offered. The project's Web page states that nothing less than a desire for justice drives its mission. "Millions of Africans were wrongfully taken from their homes in Africa to be enslaved in America," it says. "It is our moral obligation to return the descendants of these people, regardless of cost."

But the center apparently assumes that potential participants in its back-to-Africa campaign are unable to navigate a website, because elsewhere on the site the center unabashedly defames blacks. In his review of "The Blind Side," for instance, center Director James Schneider (who was scheduled to speak at a meeting this spring of the Council of Conservative Citizens, or CCC, which has described blacks as a "retrograde species of humanity") predicts that the movie will inspire a well-meaning white family to befriend a young black man, who will repay them with rape and murder. "What they should say is 'don't try this at home,'" writes Schneider, author of the pro-segregation novel White Flight. "Without this warning I am sure that somewhere in America a white family will be destroyed as a direct result of seeing this movie."

Another staffer listed at the center's site is Bob Hoy, its "director of humanitarian activities." The CCC listed Hoy as a member in 1998, the same year he made the headlines for being ejected from a meeting about race hosted by President Clinton following an outburst about whites becoming a minority.

The center also recommends that people take a test to measure their racial biases: "If the results show that you have moderate or extreme bias in favor of whites, you are OK," the website states.

The site also offers a "Dating Guide for Eastern European Ladies." "The Black or Negro is the most important type to beware of," it says. "You must never let a Negro get you in a place where nobody can see you. The nicest Negro will suddenly turn into a raving madman when he is alone with you and does not get what he wants." The dating guide continues in a similar vein about Hispanics, Jews, Muslims and Italians that are "dark or greasy."

It also warns that "men who have long hair or wear too much jewelry usually are not good either." No word on whether they, too, should be repatriated, or, if so, to where.