The Family Research Council leads the effort in a response to being listed as a hate group.

When the Southern Poverty Law Center (SPLC) last November announced that it would be adding several so-called "pro-family" organizations to its list of hate groups because of their history of using known falsehoods to attack gay and lesbians, the religious right and its allies responded with a call to "Start Debating/Stop Hating," saying the SPLC was seeking to stifle discussion of the issue. That was ironic, given that just a few days after the announcement, Intelligence Report Editor Mark Potok debated Tony Perkins of the Family Research Council (FRC) on MSNBC.

The FRC, which was one of the named groups, led the effort in December to take out a full-page advertisement in two Washington, D.C., newspapers. The ads accused "elements of the radical Left" of trying to "shut down informed discussion of policy issues" — decrying those who attempt to suppress debate "through personal assaults that aim only to malign an opponent's character." The ad was signed by 22 conservative members of Congress, three governors and several of the listed organizations. 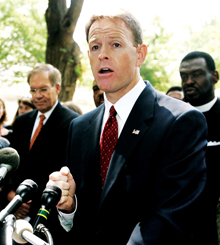 Tony Perkins of the Family Research Council said critics of anti-gay religious right groups had refused to debate the issues. In fact, the criticism of his organization and others began with a televised debate between Perkins and an SPLC official.

In a response to the advertisement, the SPLC pointed to a number of examples that suggested that it was the groups, in fact, that were maligning peoples' characters. These included an FRC booklet entitled "Homosexual Activists Work to Normalize Sex with Boys" that claimed "one of the primary goals of the homosexual rights movement is to abolish all age of consent laws and to eventually recognize pedophiles as the ‘prophets' of a new sexual order."

The exchange came at a time when religious-right leaders have accused the federal government of being beholden to a "homosexual agenda" that purportedly includes "feminizing" the armed forces through the repeal of the so-called "Don't Ask, Don't Tell" policy; enhanced physical airport pat-downs that supposedly turn on gay security officials; and demonizing an assistant state attorney general who waged a personal smear campaign against an openly gay student at the University of Michigan.

Andrew Shirvell, an assistant attorney general in Michigan, was fired after waging a vicious campaign against Chris Armstrong, the University of Michigan student body president. Shirvell, who later said he had done nothing wrong, used his personal blog to accuse Armstrong of attempting to advance a "radical homosexual agenda," calling him names like "Satan's representative" and a "privileged pervert." Michigan Attorney General Mike Cox ultimately fired Shirvell for conduct unbecoming a state employee. 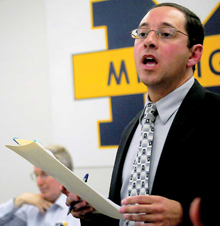 Delgaudio, a Republican elected to the Loudoun County Board of Supervisors in 1999 and re-elected twice, made the claims in an E-mail sent in his role as president of the conservative nonprofit group Public Advocate of the United States. Calling the U.S. Transportation Security Administration's (TSA) non-discrimination hiring policy "the federal employee's version of the Gay Bill of Special Rights," Delgaudio warned "the next TSA official that gives you an enhanced pat-down could be a practicing homosexual secretly getting pleasure from your submission."