Proving yet again that a black president is simply too much for some of them to handle, three right-wing conspiracy theorists in July and August broadcast racially charged hypotheses about supposed federal government plots to keep the white man down.

Proving yet again that a black president is simply too much for some of them to handle, three right-wing conspiracy theorists in July and August broadcast racially charged hypotheses about supposed federal government plots to keep the white man down.

First came Alex Jones, who has done more than anybody to popularize the theory that the government was complicit in the 9/11 attacks. On July 18, he featured on his website, Infowars, an article that characterized the Department of Homeland Security’s year-old “If you see something, say something” terrorism-awareness campaign as a racist conspiracy to “characterize predominantly white, middle class, politically engaged Americans as domestic extremists.”

The program, which actually encourages people to consider “behavior, rather than appearance” when considering whether to report suspicious activity, entails a series of public service announcements designed to drive home that point. What piqued Jones was a 10-minute PSA in which most of the “terrorists” are white, while the citizens who report their suspicious activities are all minorities. He milked the issue for at least a month. “What do you think of [DHS’] rebranding that the terrorists aren’t Al Qaeda anymore?” he said on his Aug. 18 radio show. “It’s that veteran, it’s that gun owner, it’s that farmer … it’s that white person. Whites are the new Al Qaeda.” 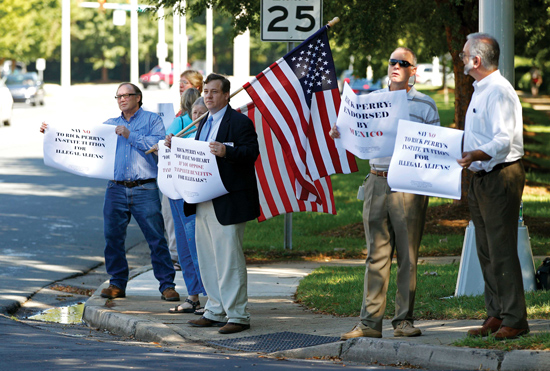 After a barrage of criticism for appearing to promote violence, Gheen vainly attempted to backpedal. He posted on his website a “clarification” that read, in part, “What peaceful and political hope do we have for any future border or immigration enforcement in America? Those responsible for this well organized invasion and betrayal of the American citizenry know the answer to that … NONE!” Offered a further opportunity to explain himself, Gheen admitted to radio host Alan Colmes, “I should have prepared my comments [on Mefferd’s show] a bit better” — but only “so they would not be exploited by my political opposition.”

In the meantime, veteran fear-monger Glenn Beck on Aug. 11 offered a racially charged vision of the 2012 election. Discussing the prospects of various Republican presidential candidates, Beck said that if President Obama loses to a Republican next year, the Administration will try to destroy America on its way out the door. “The next president needs to be willing to sacrifice his life, because the choices the next president is going to have to face is [sic] going to be awful,” said Beck, in a rant that was quickly picked up by the white supremacist Council of Conservative Citizens. “I firmly believe race riots are on the way.”