Bill White, the neo-Nazi Internet threat-maker and former head of the American National Socialist Workers Party, is out of prison and up to his old tricks.

Bill White, the neo-Nazi Internet threat-maker and former head of the American National Socialist Workers Party, is out of prison and up to his old tricks.

After serving time for earlier offenses, White was released in April on the condition that he refrain from participating in “any Internet related business or hobby involving a website, and the posting of any information on any website.” He had been found guilty in late 2009 of threatening several people through intimidating phone calls and Internet postings.

Now, in an apparent end-run around the court’s restriction on his activities, White is relying on old-fashioned ink-and-paper media to spread his hateful beliefs. His outlet of choice is American Free Press, an anti-Semitic weekly that bills itself as “America’s Last Real Newspaper.” Since May 23, White has contributed at least eight articles to the racist publication founded by Holocaust denier Willis Carto. Those articles are then published in the paper’s online version. 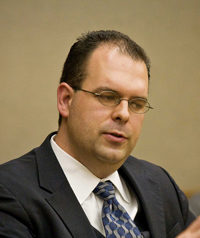 Neo-Nazi ex-con Bill White was forbidden to post on the Internet as a condition of his parole. So he started writing for the anti-Semitic publication American Free Press, which then promptly posted White's articles online.

According to correspondence obtained by the Southern Poverty Law Center, White has also waded back into the real estate business — apparently going back to his pre-prison routine of buying up cheap properties, renovating them and renting them out. In mid-July, he posted an advertisement on Craigslist seeking a property manager and real estate manager in Roanoke, Va.

The SPLC obtained a copy of the message White sent to those who responded: “First, I am ‘the’ Bill White that people like to make noise about. If this is a problem for you, let me know and I am not offended. Much if not most of what you have likely read about me is untrue, but I have no desire to engage in a discussion over it.” The rest of the E-mail is a job description and information about the company. White claims he represents a group of investors who, starting with a handful of properties, hope over the next two years to put up $10 million and buy 100 or more buildings.

White is no stranger to the real estate game. He began buying up properties in 2004, accumulating houses and apartment buildings in a largely black neighborhood for what he called his “ghetto improvement project.” His reported pattern of improving the distressed properties, raising rents, and, often, booting out original residents who could no longer afford to stay led the local Legal Aid Society to file complaints with the U.S. Department of Housing and Urban Development. Tenants at the time also claimed White walked around their neighborhood armed with a shotgun and tried to intimidate them by saying the Klan was coming to “regulate” the area.