Victor Dewayne White was just another reclusive extremist with ties to white supremacist groups and the Republic of Texas (ROT), which claims Texas is a sovereign nation never legally annexed by the United States. Then, in September, police say he decided to wage a one-man war against local authorities in a violent standoff that left three people wounded in West Odessa.

The standoff began after an employee of an oil company went to White's property with Ector County Sheriff's Deputy Ricky Tijerina and Sgt. Steve McNeil to access an oil well to which the company owned rights. White allegedly began firing almost immediately, wounding all three men as they retreated.

Before moving to a fortified position, White climbed into a sheriff's vehicle and taunted officers. "He got on the radio and basically was spouting off things about the deputies and law enforcement, making political and religious statements and making comments urging the snipers to make him a martyr," Texas Department of Public Safety spokesman John Barton told the Odessa American. 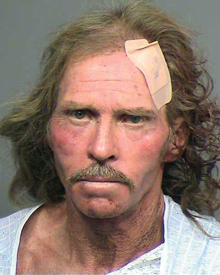 In the 22-hour siege that followed, police say White sporadically opened fire on law enforcement helicopters and officers from a large dirt mound that contained trenches, bunkers and firing positions. The dirt barricade, which had a white cross and a flagpole on top, was built near the trailer where White lived without utilities on several desolate acres.

White finally surrendered as SWAT team members in an armored vehicle closed in on him. He was indicted in December on three charges of attempted capital murder and was being held on a $2 million bail.

This wasn't the first confrontation between law enforcement and individuals associated with the ROT. In 1997, Richard McLaren, who was then head of the ROT, initiated a six-day standoff with hundreds of Texas Rangers after his followers kidnapped a neighbor couple at gunpoint and demanded the release of a jailed movement member. One ROT member was killed in the gunfight that followed, and McLaren was eventually sentenced to 111 years in prison for his role.

In addition, John Joe Gray, a reported former ROT member, has been holed up on his remote property near Trinidad, Texas, for the past decade — ever since posting bail on charges that he attacked a police officer during a traffic stop. He later sent a letter to authorities telling them to bring along body bags if they came after him.