Elements of the anti-gay right have searched long and hard for logic to make condemnation of homosexuality resonate: Gay men are pedophiles, homosexuality causes God to send hurricanes to Florida and kill off blackbirds in Arkansas, and, perhaps most silly, the theory that an intricate LGBT plot — the so-called “radical homosexual agenda” — is on the verge of gutting Western civilization.

Elements of the anti-gay right have searched long and hard for logic to make condemnation of homosexuality resonate: Gay men are pedophiles, homosexuality causes God to send hurricanes to Florida and kill off blackbirds in Arkansas, and, perhaps most silly, the theory that an intricate LGBT plot — the so-called “radical homosexual agenda” — is on the verge of gutting Western civilization.

It doesn’t stop there. Homophobes are certain that acceptance of same-sex marriage will destroy all marriage. Gender differences will dissolve. Straight children will go gay. The armed forces will collapse as gay men and lesbians turn hardened warriors into limp-wristed pantywaists. People will start marrying their children, their siblings, their dogs, even certain attractive cars.

But to their surprise, polls show that Americans increasingly aren’t buying what the gay-bashers are selling. Something new, it seems, was needed.

And so the anti-gay movement this spring hit upon a new metaphor. The old lines of attack, apparently, weren’t stirring up enough indignation to satisfy the professionally indignant, and the whole movement was in need of something big, a new way to frame homosexuality in properly terrifying terms — something like the treacherous iceberg that sank the Titanic, conveniently, 100 years ago. 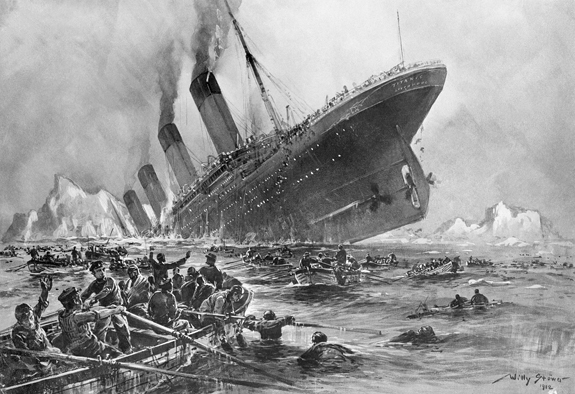 Western civilization, facing the “moral iceberg” of the “homosexual agenda,” is headed straight for Davy Jones’ locker — or so say some of the more hysterical anti-gay organizations.

“The homosexual agenda,” Mathew Staver, president of the Liberty Counsel, declared in a recently produced Internet video, “is the moral iceberg.”

Produced by Truth in Action (TIA) Ministries, the video offers up a “Who’s Who” of anti-gay voices who collectively complain that a “radical homosexual agenda” is advancing at breakneck speed, “dulling our sense of righteousness and undermining the American family.” Against a backdrop of ominous seafaring images and towering frozen monoliths threatening a ship on rough seas, Staver warns that homosexuality is “the biggest threat ... in our lifetime to religious freedom and the fundamental values we share here in America.”

Michael Brown, the mustachioed pundit who has emerged as the anti-gay right’s most credentialed intellectual, takes the metaphor one step further: “We’ve already hit the iceberg, and the ship is already going down.”

It shouldn’t be all that surprising that TIA, formerly Coral Ridge Ministries, would take the centennial of the Titanic’s sinking as one more opportunity to try to scare the bejeezus out of us. Earlier this year, the group did its level best to draw attention to the shocking fact that the Day of Silence, part of an anti-school-bullying campaign, coincided this year with Adolf Hitler’s birthday.

Of course, Truth in Action is not alone in paying homage to the Titanic anniversary. All this year, history buffs have revisited the many facets and mysteries of the Titanic and its fateful maiden voyage. James Cameron recently released a 3-D version of his 1997 blockbuster movie “Titanic.”

And Vision Forum, considered one of the major purveyors of hard-right Christian home-schooling materials, held a “Titanic 100” event last April at the Lawrence Welk Resort in Branson, Mo. — complete with an “Edwardian Ladies Tea,” during which women wore period costumes as if they had been aboard the doomed vessel themselves. The event was meant to celebrate the men who went down with the ship in order to save women and children — or, more particularly, the family values that led them to act with such Old World chivalry.

One might ask if it isn’t all just a little much. How many times can someone cry, “The ship is going down!” before starting to sound shrill — and a bit untethered from reality — when calm waters are all around?

The obvious answer: Just once.