An alleged plot by members of a Georgia militia is only the latest to target law enforcement officials for death.

If moviemakers are thinking about “Grumpy Old Men: The Militia Sequel,” they should head straight to Georgia for screenplay ideas. There, four members of an antigovernment militia — all Medicare-eligible — are behind bars at the Hall County Jail in Gainesville, awaiting trial on federal terrorism-related crimes.

But this case is no comedy. Officials say the men were plotting to bomb federal buildings, assassinate public officials and attack cities with deadly ricin. 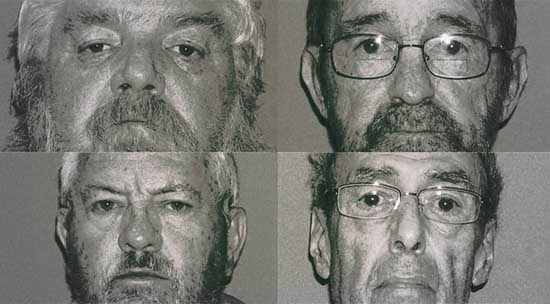 Another Over the Hill Gang: The suspects arrested in an alleged mass murder plot were elderly, but officials say that doesn't mean they weren't deadly serious.

The tapes capture suspects discussing the possible assassination of U.S. Attorney General Eric Holder, among other federal officials. At one point, Thomas told members of the group that he’d become intrigued with an online novel, Absolved, written by longtime Alabama militia leader Mike Vanderboegh, that describes a small group of Americans who assassinate federal officials.

“Civilian government operatives [are] who we’re going to be shooting at — IRS, ATF, FBI and the cops,” Thomas allegedly says on one of the tapes, referring to federal tax and law enforcement agencies. “I could shoot ATF and IRS [agents] all day long, all the judges and the DOJ and the attorneys and prosecutors.”

The case was a reminder that terrorist threats come from many quarters. “While many are focused on the threat posed by international violent extremists,” said U.S. Attorney Sally Quillian Yates of the Northern District of Georgia, “this case demonstrates that we must also remain vigilant in protecting our country from citizens within our own borders who threaten our safety and security.”

It also was the latest of several plots allegedly hatched by members of the antigovernment “Patriot” movement that has grown dramatically in recent years. (From 149 groups in 2008, the movement swelled to 1,274 organizations in 2011, according to the latest Southern Poverty Law Center count). As in the Georgia case, two recent plots also targeted law enforcement.

Nine members of the Hutaree Militia were arrested in the Midwest, most of them in Michigan, in March 2010. They were accused of plotting to murder a police officer and then use homemade bombs and missiles to attack the hundreds of other officers who would likely attend that victim’s funeral. Members of the militia conducted military-style training in Michigan’s Lenawee County, including demonstrations of how to build bombs. The defendants, except for one man who pleaded guilty in November, face trial later this year on conspiracy charges.

A year later, in March 2011, state and federal agents arrested self-styled commander Schaeffer Cox and four followers in the Alaska Peacemakers Militia on weapons and conspiracy charges related to an alleged plan to kill Alaska state troopers and a judge. (One of those arrested was freed when state charges were dropped.) Then, last October, a 53-year-old woman who was the militia group’s secretary was arrested trying to enter Canada. Federal officials say they found a pistol and detailed information about ricin and pipe bombs in her truck. 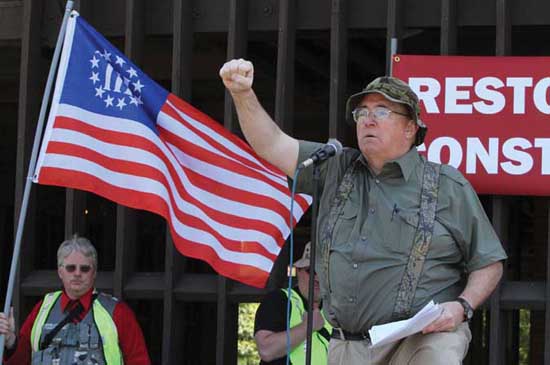 The group’s website links to the usual array of conspiracy-minded material from other Patriot groups, but it also links to the Council of Conservative Citizens, a group that angrily opposes racial intermarriage and has described black people as “a retrograde species of humanity.” And it links to American Patrol, a racist anti-immigrant hate group. But what may be most remarkable is an essay on the site by Henry Makow, “Protocols of Zion & Freemasonry’s Final Revelation.”

That essay extensively cites the Protocols of the Elders of Zion, a viciously anti-Semitic forgery that was much admired by Hitler and is treated in the essay as revelatory. Makow discusses “the primitive Talmudic injunction to rule the world and usurp all its wealth, as outlined in the Protocols.” Elsewhere on the site, the Georgia Militia describes Israel as a “cancerous zionist [sic] entity” and refers to “our zionist occupied government.” Zionist Occupied Government, or ZOG, is a phrase employed by neo-Nazi groups to describe the federal government.

Thomas also posted several racially charged items on the Internet. On Dec. 12, 2008, for instance, he wrote in a post to the conservative Redstate.com website that if the Supreme Court found that President Obama was not a citizen, “[y]ou can bank on race riots the like of which would make the L.A. and Watts riots look like a playground scuffle. Half the country would go up in flames.”

Did They Mean It?

“The credibility of [the two informants was] demonstrated by [their] accurate recounting of the conversations recorded during meetings” with Robert and Thomas, the lead FBI investigator said in an affidavit. The informant facing the molestation charges was given an FBI polygraph during the probe and it was determined he “gave less than truthful responses,’’ the affidavit says.

Thomas’ wife, for one, said the charges are ridiculous.

Thomas is a great-grandfather who would never carry out acts of violence, said Charlotte Thomas, 71, when contacted at the couple’s retirement “dream home” near Cleveland, in the rolling hills of north Georgia. At the home, there is a “Frank Sinatra Fans Only” parking sign not far from a yellow, Revolutionary War-era “Don’t Tread on Me” flag. (The Gadsden Flag, as it’s formally called, is used as a symbol by both the Tea Party movement and several militias.)

“Fred spent 30 years in the Navy and has had a ‘top secret’ clearance for work he’s done with various government contractors,” she said. “He would not do this. He’s very patriotic and loves this country.” Besides, she added, her husband is too infirm to pose any threat to anyone. He is being treated for kidney disease and had surgery last year to remove a portion of his right lung.

During a search of the couple’s home, federal agents seized 52 weapons and 30,000 rounds of ammunition, including “sniper” and “sub-sonic” rounds designed to be used with silencers. Thomas’ firearms collection included assault rifles, shotguns and handguns with extended ammunition magazines. Charlotte Thomas said her husband does collect firearms, but insisted they are all legal.

Down the road a bit, in the community of Toccoa, Ga., Roberts’ wife, Margaret, said her husband isn’t a terrorist and is more interested in rescuing dogs and cats than revolution. She is still caring for the couple’s 18 rescued dogs and 30 cats at their home, while Roberts remains in jail without bond. “These charges are absolutely false,” she said. “This case is about a child molester trying to help himself out of a situation he’s in, and instigating this whole thing.”

During a three day-hearing in November, defense attorney Dan Summer, who represents Crump, claimed that the “government doesn’t have a strong case.” “Surely, there was talk about ricin, but it was ridiculous,” Summer told the court. “It was like an old man in the stages of senility talking out of the side of his mouth.” But the presiding federal magistrate judge denied bail to the four, The Associated Press reported, saying they remained a danger to the public.

That was also the view of the prosecutor, Assistant U.S. Attorney Robert McBurney. “We’ve moved beyond hypotheticals,” he said, arguing the suspects had gone beyond mere talk and begun to act to further their conspiracy.

Thomas allegedly expected a “line-in-the-sand” event like the shooting of an antigovernment protester that would require a harsh reaction. “He openly discussed having compiled what he called [a] ‘bucket list’ of government employees, politicians, corporate leaders and members of the media he feels needed to be ‘taken out’ to make the country right again,” the charging document says.

On March 17, 2011, an informant taped Thomas allegedly saying: “The right people have to be taken down and taken down soon. There is no way for us, as militiamen, to save this country, to save Georgia, without doing something that’s highly illegal. Murder. That’s f------ illegal, but it’s gotta be done.”

In May 2011, an informant joined Thomas on a trip to Atlanta, allegedly to surveil ATF and IRS offices. “Let’s shoot the bastards that we discover are anti-American,” he said during the trip, the complaint says. “And to me, the easiest and best way to do that is to walk up behind them with a suppressed .22 [pistol]. I am of the, uh, old school, Mafia: one behind the ear with a .22 is all you need.”

Thomas also allegedly talked about obtaining enough explosives “to blow the whole building like Timothy McVeigh,” who murdered 168 people in the 1995 Oklahoma City federal building bombing. He told his comrades that he was ready to die when they acted in a “little less” than a year, documents allege.

What is never really explained is what the plotters allegedly hoped to accomplish. About the closest thing to an explanation came in a single comment from their ringleader: “When it comes time to saving the Constitution,” Thomas allegedly told his comrades, “that means some people gotta die.”