File this under the “What is he thinking?”

File this under the “What is he thinking?” category.

Santorum, known for his ultra-conservative policies on social issues such as abortion rights, same-sex marriage and pornography, amassed more than 3 million votes and won primaries and caucuses in 11 states before bowing out of the race in May 2012. 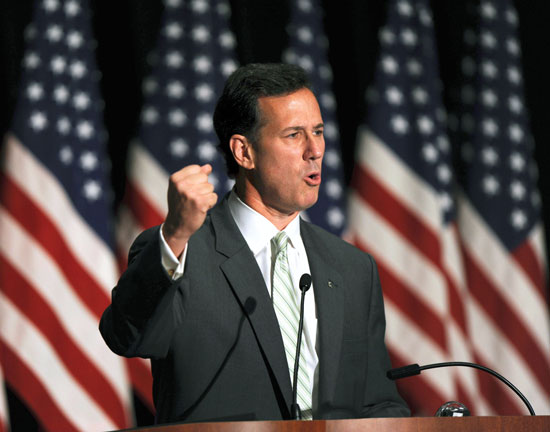 Mainstream to the margins: After abandoning his 2012 bid for the GOP presidential nomination, former Sen. Rick Santorum took up with a “news” website that specializes in birther conspiracy theories, end-of-the world predictions, and dubious claims like the allegation that eating soybeans causes homosexuality.
RICK WILSON/AP IMAGES

On Dec. 2, Santorum penned his first weekly column for WorldNetDaily (WND), the supermarket tabloid of the antigovernment “Patriot” movement — a website that once ran a six-part series claiming soybean consumption causes homosexuality. The website also has identified Satan as the first “leftist” and declared that Muslims have a 20-part plan for conquering America. It is best known for relentlessly flogging the widely debunked “birther” theory that Obama is constitutionally ineligible to be president because he is not a “natural born” U.S. citizen. It also relentlessly hawks varying imminent end-times scenarios.

By writing for WND, Santorum will get to keep his name in front of the most conservative elements of the American electorate as he cools his heels while waiting for the next round of Republican primaries.

But WND readers might feel a little let down by Santorum’s columns, which have titles such as “What Christmas is All About,” “America the Great,” and “Poverty Need Not be Permanent.” He seems a milquetoast compared to the smorgasbord of anti-gay activists, white nationalists, Muslim-bashers, conspiracy theorists, end-times prophets and other ultra-conservative hardliners that typically inhabit WND.

Perhaps he’s just getting warmed up. Or perhaps he knows that if he gives WND readers the red meat they crave, his words could haunt him when he begins campaigning again in a few years.