Over the years, reports of the death of Omar Hammami, the rapping jihadist from Alabama, have been greatly exaggerated. Numerous times since 2007, the American propagandist for Al Qaeda has been rumored to have been gunned down or blown to bits in Somalia, only to appear alive and well a few weeks later while releasing yet another anti-U.S. video filled with rap lyrics and hip-hop music.

But a recent report of Hammami’s death in Somalia at the hands of his fellow jihadists in the brutal al-Shabaab terrorist organization appear accurate, according to The Associated Press, which quoted a Somalia-based Islamic center and a U.S. terrorism expert who closely follows the inner workings of al-Shabaab.

Hammami, who was 29 and grew up in the small Alabama city of Daphne on the Gulf Coast, was reportedly killed in an ambush in southern Somalia on Sept. 12. Hammami, who adopted the name Abu Mansoor al-Amriki — meaning “the American” — had reportedly been on the run from his fellow jihadists for several months after a falling-out with al-Shabaab’s leadership. He had accused the leadership of living extravagant lifestyles on taxes collected by the group’s fighters from Somalis. 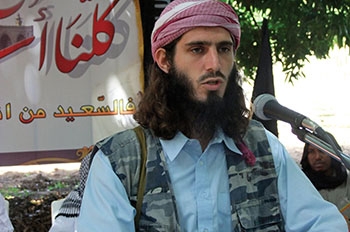 Omar Hammami was once a popular high school student in Alabama. But then he dropped his Christianity for radical Islam, took a nom de guerre, and moved to Somalia. Now he has reportedly been killed by fellow Islamists annoyed by his criticism of their lavish lifestyles.

He was also on the run from U.S. authorities. He was on the FBI’s Most Wanted list with a $5 million reward for his capture.

His life and violent death in Somalia was a long way from his upbringing in Daphne, Ala., where he dated one of the prettiest girls in town, was class president of his high school as a sophomore, and was compared by a classmate to the mischievous, coming-of-age movie hero Ferris Bueller.

His father was a Muslim immigrant from Syria, his mother a Southern Baptist. Hammami was a Christian. But the popular, intellectually gifted Hammami grew increasingly disenchanted with America and its foreign policy after visiting Syria around his junior year in high school. By 2007, he had moved to Somalia and joined the ranks of al-Shabaab, a group so barbaric that its members in 2008 stoned to death a 13-year-old rape victim in a stadium filled with spectators.