Among the talking heads to emerge as “experts” on racial tension in the aftermath of the killing of Trayvon Martin last year, perhaps none was so surprising as Frank Taaffe, a neighborhood watchman who volunteered with George Zimmerman.

On CNN, Taaffe contemplated the implications of witness testimony and the meaning of forensic evidence. He fought with attorneys about criminal law and disagreed with forensic experts over whether the small quantity of THC in Martin’s blood made him violent. But according to an investigation published by Mother Jones magazine last month, Taaffe brought something more.

A 56-year-old New York native, Taaffe has a lengthy criminal record and a history of racist views. He has appeared regularly on “The White Voice,” a website and podcast advertised as “a pro-White Voice for the Silent Majority.” During one appearance there in late July, Taaffe argued that whites and blacks have no business intermingling. 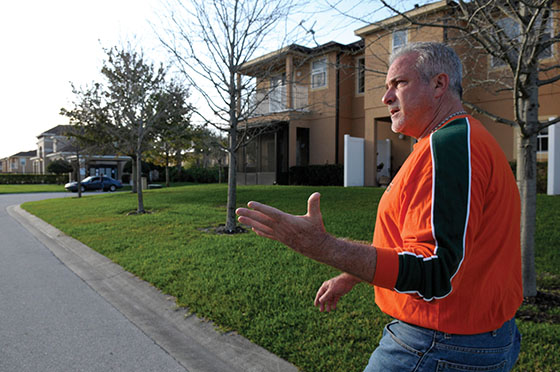 “This trial is waking up white America, man,” Taaffe said. “I’m fed up with the bullshit and the glad-handing to this one group of people who now control what we do and say. Come on, man, wake up America!”

In other race-infused remarks during the trial of Zimmerman for the February killing of Martin in Sanford, Fla., Taaffe told The New York Times that his and Zimmerman’s gated community had been burglarized by “Trayvon-like dudes with their pants down.” (The irony, Mother Jones reported, is that Taaffe was himself arrested in 2000 for burglary.) On HLN’s “Dr. Drew On Call,” he said affirmative action was “slavery for whites.”

When Mother Jones contacted Taaffe for comment, he was defensive. “There is a thing called First Amendment speech,” Taaffe said. “I’m merely echoing the suppressed voices in this country that have been beleaguered by affirmative action and crimes committed by that particular group of people.”

In a September follow-up article, Mother Jones reported that Taaffe had teamed up with “The White Voice” co-host Joe Adams to produce a “weekly white-power podcast” called “Standing Our Ground.” In a discussion of white women who marry black men on that podcast, Taaffe — who said earlier that “[w]e might be white separatists, but we’re not white supremacists” — commented, “You lie down with dogs, you’re going to get fleas — especially if they’re black dogs.”