June 5
A Chicago federal judge sentenced Brian J. Moudry, a white supremacist with the words “Blue Eyed Devil” tattooed on his shaved scalp, to 10 years in prison for burning down a black family’s Joliet, Ill., home in 2007. Judge Robert Gettleman admonished Moudry, 36, that the example of his appointed counsel, who is black, should show him that “race doesn’t matter.”

June 6
Police in Concord, N.H., arrested Matthew Peters, 22, for allegedly robbing and beating a man in February. Peters and Daniel Boothby, 25, who was arrested earlier in the attack along with Margo McNair, 37, are linked to the Brotherhood of White Warriors, a racist New Hampshire street gang. Peters’ girlfriend, a former Concord elementary school teacher named Peggy Sinclair, 50, was arrested almost three months later for allegedly conspiring with Peters to smuggle drugs into prison.

June 14
Corey Wyatt, 28, and his wife Kimberly Wyatt, 32, of Springfield, Ore., were indicted for allegedly buying a gun for white supremacist ex-convict David “Joey” Pederson before Pederson and his girlfriend embarked on a 10-day killing spree in three northwestern states. If convicted, the Wyatts could each face three to 15 years in prison and fines of as much as $250,000. 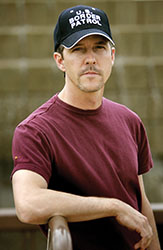 July 3
Chris Simcox, co-founder of the Minuteman Civil Defense Corps, a now-defunct group of armed vigilantes who patrolled the Arizona-Mexico border looking for undocumented immigrants, pleaded not guilty to charges that he molested three girls under the age of 10, including his own daughter. Prosecutors in Maricopa County, Ariz., reportedly offered Simcox, 52, a 10-year sentence in exchange for a guilty plea. If he declines, he is set for trial on Feb. 27 and could face up to life in prison.

July 12
Ventura County, Calif., sheriff’s deputies shot and killed Daniel Curtis Houfek after he allegedly led them on a chase, then stopped his car, stepped out and aimed a gun at them. Houfek, 42, was a leader of the Deadline Family Skins, a California racist skinhead group. The chase began after a suspicious-looking man identified as Houfek was reported sitting in a parked car near a Girl Scouts lodge.

July 23
San Antonio, Texas, police arrested John Pugh, a 19-year-old member of the Aryan Brotherhood of Texas, on charges of compelling prostitution and trafficking of persons younger than 18 by allegedly forcing a 16-year-old boy to have sex with men for money. Two days later, Billy Frank Weatherred became the ninth member of the racist prison gang to plead guilty of the 36 who were indicted in an unrelated federal racketeering conspiracy that involved murders, kidnappings, robberies and drug offenses. 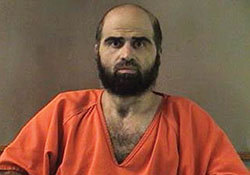 August 28
A military jury in Killeen, Texas, sentenced Maj. Nidal Malik Hasan to death by lethal injection for killing 13 people and wounding 43 in a November 2009 shooting spree at Fort Hood’s Soldier Readiness Center. A psychiatrist who was about to be deployed to Afghanistan, Hasan, who was convicted in the killings five days earlier, was born and raised in Virginia and is the son of Palestinian immigrants. Officials had mixed views on whether Hasan’s spree was based on Muslim extremism or was, as the Department of Defense said before his court martial, workplace violence.