Three antigovernment activists appeared in a Rome, Ga., federal court in late February, accused of planning a coordinated terror campaign intended to cause mass hysteria and force the declaration of martial law, “therefore triggering other militias to join the fight.”

According to a nine-page federal criminal complaint, Brian Cannon, 37, Cory Williamson, 28, and Terry Peace, 45, all of whom shared an address in Rome, plotted “in online chat discussions, which were monitored by [the] FBI, during which they chatted about carrying out an operation against the government.”

During one online chat in late January, the complaint alleges, Peace urged militia members to “review guerilla warfare tactics, small unit tactics, accumulate supplies, and prepare family” for an attack set for February. The “primary targets” were to include the Transportation Security Administration, the Department of Homeland Security and the Federal Emergency Management Agency. 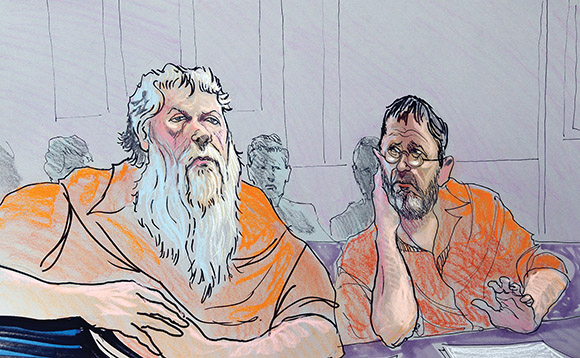 Ray Adams (left) and Samuel Crump were convicted in January of plotting to attack government facilities in four cities with the deadly biological toxin ricin. They face up to life in prision. AP IMAGES/RICHARD MILLER

The men were caught with help from two confidential human sources whose work supplemented the FBI monitoring that captured their online interactions.

On Feb. 8, authorities recorded a telephone call between a confidential source and Peace, who told the source that he wanted 12 pipe bombs constructed for “maximum fragmentation.” A week later, the three men loaded rifles into a truck and drove to Cartersville, Ga., where they were set to meet the source, who authorities had supplied with inert decoys including pipe bombs and two thermite devices. When the militia members took possession of the supposed explosives, the FBI arrested them.

“This case is a stark reminder of the threat we face not just from abroad, but from within our own borders from our own citizens,” U.S. Attorney Sally Quillian Yates said in a press release.

It is not the only one. On Jan. 17, a federal jury in Gainesville, Ga., convicted two men of plotting to produce the deadly poison ricin and use it “to attack government buildings and kill government employees.” Samuel Crump Jr., 70, and Ray Adams, 57, were among four suspects arrested in 2011 after FBI informants recorded them plotting to disperse deadly ricin powder in Washington, D.C., Atlanta, Jacksonville, Fla., and New Orleans. It’s not clear what they expected to accomplish, but they talked about “saving the Constitution” by killing people.

Two of the men, Frederick Thomas, 73, and Emory Roberts, 67, entered guilty pleas in April 2012, and were sentenced to five years in prison. Crump and Adams face up to life in prison when they are sentenced.

Aspiring domestic terrorists were not limited to the Peach State: On Jan. 8, police arrested three Littlerock, Calif., men., after Los Angeles County sheriff’s deputies found a soundproof bunker hidden underneath a house. The bunker was filled with guns, ammunition and white supremacist paraphernalia, and outfitted with a 25-yard shooting range. Royce Gresham, 33, Todd Hunt, 54, and Larry Finnell, 62, were charged with weapons violations and arraigned at the Antelope Valley courthouse.