Donald Trump described President Dwight D. Eisenhower’s brutal “Operation Wetback” as a “very humane” way to accomplish mass deportation, responded to the beating of a Black Lives Matter protester at a campaign rally by saying, “Maybe he should have been roughed up,” and claimed to have personally seen “thousands and thousands” of New Jersey Muslims celebrating the 9/11 attacks — something that both law enforcement and media investigations have thoroughly debunked.

Ben Carson said he found the notion of gun control more disturbing than the sight of a bullet-riddled dead body, believed the biblical figure Joseph built the Egyptian pyramids to serve as granaries, and asserted that Palestinian Authority President Mahmoud Abbas, Ayatollah Ali Khamenei of Iran and Russian President Vladimir Putin all went to school together in Moscow in 1968.

Ted Cruz suggested baselessly that the man who murdered three at a Colorado Planned Parenthood (see story, p. 7) was a “transgendered leftist activist.” Mike Huckabee lauded American Family Radio — which features among its pundits Bryan Fischer, who claims that LGBT people were responsible for the Holocaust and that because American Indians failed to embrace Christianity, they deserved to have their land taken by European settlers — for offering viewpoints that people “are not going to get on NPR.” Marco Rubio selected a man who believes President Obama was fathered by a communist pedophile as co-chair of his Alabama campaign committee. 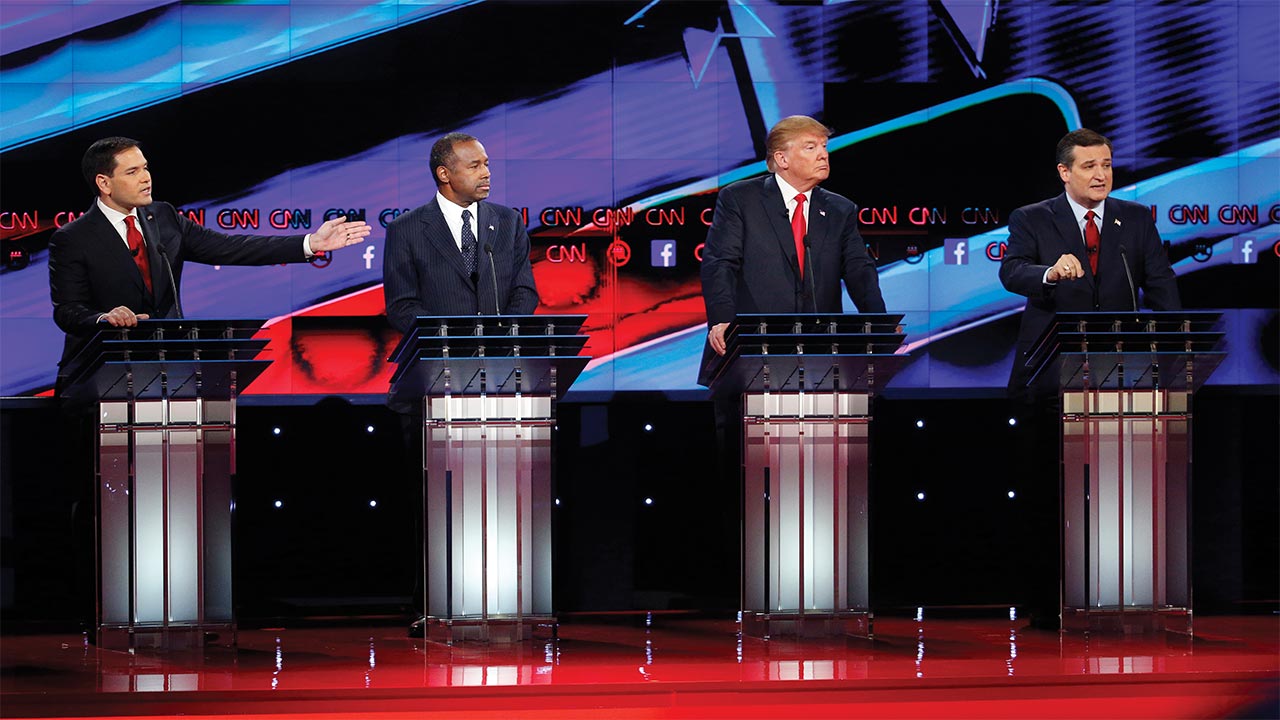 Strange brew: Political races, especially for the Republican nomination, have been marked by an extraordinary level of extremist, demeaning and factually untrue rhetoric.

These men are GOP front-runners — individuals who, if the 2016 presidential race continues along the same path in which it began, stand a reasonable chance of being elected to what is arguably the most powerful position on earth.

It’s hard to say which candidate’s rhetoric is most appalling. Donald Trump, whose combination of nationalism, populism and xenophobia has inspired serious analysts on both the left and right to describe him as a fascist or quasi-fascist, perhaps edges out the competition in this regard. That’s buttressed by some of his fans’ propensity to shout white nationalist slogans at rallies and invoke his nativist platform to defend anti-immigrant violence, as two Massachusetts men allegedly did after their August arrest for beating a homeless Mexican immigrant.

But even Cruz and Huckabee, who are widely considered more serious and relatively “moderate” contenders for office, spoke at a November “National Religious Liberties Conference” organized by Kevin Swanson, a pastor and advocate who believes LGBT people should be put to death and says America should “repent of Harry Potter.” It would be funny if it weren’t so scary.

Things are bad in some places at the state and local level, too. In Knox County, Tenn., Tom Pierce, candidate for county commissioner for the Traditionalist Worker’s Party (TWP) — an organization recently created as the political wing of the Traditional Youth Network hate group — argues in his platform that anyone who receives an abortion should be executed. Supporters of Tony Hovater, TWP’s candidate for the New Carlisle, Ohio, City Council, had to clarify that Hovater was not about “white power” but rather “white political power.”

Meanwhile, Augustus Sol Invictus, the Florida Libertarian Party’s candidate for U.S. Senate, admitted in October that he once “sacrificed an animal to the god of wilderness” and confirmed, “Yes, I drank the goat’s blood.”

On the bright side, if there is one, Invictus, a neo-Pagan, is unlikely to mount a campaign to rid the country of religious minorities — more than can be said for some serious contenders for higher office.