This morning, the Southern Poverty Law Center followed up an earlier lawsuit against two Klansmen by filing a complaint against their organization, the Imperial Klans of America (IKA), and three additional individuals (full story here). Both legal actions are based on the savage July 2006 beating by several IKA members of a 16-year-old boy at the Meade County Fairgrounds in Brandenburg, Ky. The attackers, one of whom weighed 300 pounds, called their 150-pound victim a “s---” and left him with broken bones and other serious injuries.

The new lawsuit was filed after SPLC investigators found evidence that the boy was attacked during the course of an IKA recruiting drive. It argues, among other things, that the IKA leaders bear responsibility because the drive was part of official IKA business. The new suit names both the IKA organization and its national leader, imperial wizard Ron Edwards.

Edwards owns a 15-acre compound in Dawson Springs, Ky., that serves as the group’s headquarters. The land is also used annually to host Nordic Fest, a racist music festival that brings together Klansmen, neo-Nazi skins and other extremists on Memorial Day weekend. Take a look at the 2005 edition of Nordic Fest, featuring an IKA band called Totenkopf Saints (Totenkopf refers to the SS “death’s head” symbol in German) below. The guitarist on the far left is Andrew Watkins, an IKA member who, along with Jarred Hensley, is now serving a three-year sentence for a criminal conviction in the Meade County attack.

The band’s singer is Stephen Edwards, son of Ron Edwards. His lyrics aren’t easy to understand amidst all the bellowing, but here’s what he’s trying to say: 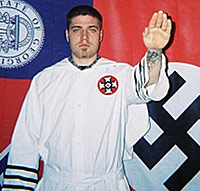 Hensley, the second IKA member serving time for the Meade County attack, was a grand titan, or No. 2 official, in the Ohio branch of the IKA. His Yahoo screen name is ohioss88 (SS refers to elite Nazi troops and 88 is neo-Nazi shorthand for “Heil Hitler”) and his myspace monikers have been beatdownbully and violence. At right, Hensley, clad in an IKA robe, sieg heils.