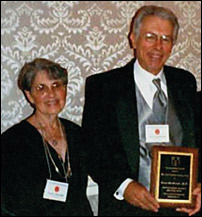 Kevin MacDonald, the California State University, Long Beach, psychology professor who wrote an anti-Semitic trilogy explaining why he thinks Jews are bad for white societies, has been removed from instructing certain classes. Gerry Riposa, dean of the College of Liberal Arts, told Hatewatch that MacDonald would no longer be teaching lower-level courses, including a required course for psych majors specializing in child development. MacDonald, at right, received an award and $10,000 for his work on the Jews from The Occidental Quarterly, a white supremacist journal. He was accompanied at the 2004 ceremony by Virginia Abernethy, a self-described “white separatist” and official of the racist Council of Conservative Citizens.

But Riposa says that’s not so. He insists that MacDonald’s lower-level classes have had “really low enrollments,” which is unacceptable given the rapid growth in Long Beach’s student body. Riposa said he has ordered MacDonald to come up with “some other courses” than the three or four he has taught for years because he “needs to do something else.”