Kyle Bristow — the pugnacious chair of the Michigan State University chapter of Young Americans for Freedom (MSU-YAF), a student organization listed as a hate group by the Southern Poverty Law Center — announced Sunday that he’s resigning “so that the next generation of YAFers can replace me.” 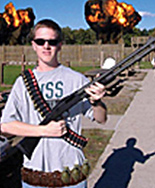 Bristow (right) also confirmed that an MSU-YAF-sponsored lecture by Jared Taylor, the editor of the academic racist journal American Renaissance, would not occur on the MSU campus in March as originally planned. “Though MSU-YAF is not officially hosting Jared Taylor as a speaker this semester, I did see to it that he will be able to speak at a location near MSU and be hosted by another organization (the show will go on!),” Bristow wrote. (As it happens, the three-day biannual conference of American Renaissance, held in Herndon, Va., and featuring former Klan leaders and other assorted white supremacists, wrapped up the same day he spoke.)

MSU-YAF was added to the SPLC list in early 2007, after MSU-YAF attempted to organize a “Catch an Illegal Immigrant Day” contest, held a “Koran Desecration” competition, joked about distributing smallpox-infested blankets to Native American students, and hosted a series of lectures by hate group leaders such as Nick Griffin that drew skinheads and other white supremacists to the MSU campus. Griffin is the Holocaust-denying leader of the extreme-right British National Party.

Bristow’s resignation came three days after the MSU Student Assembly voted to ask the university’s administration to officially define the difference between free speech and hate speech. Student Assembly Chairman Michael Leahy said the bill was passed in direct response to the series of controversial lectures sponsored by MSU-YAF.

Now a junior at MSU, Bristow took over leadership of MSU-YAF in the spring of 2006 and rapidly radicalized the conservative student organization. “I have no regrets as to what I did, said, or planned to do while serving as chairman of MSU-YAF,” he boasted in his sprawling, self-congratulatory letter of resignation. “I am very proud of my exploits.” Then he went on to link those exploits with the flight of a magnificent bird. “While I was driving back to Michigan State University from home today, I saw a solitary Bald Eagle flying about the expressway. It was flying in the same direction I was driving,” Bristow wrote. “I find it fitting to pass the torch of freedom that I have carried for the last year-and-a-half on to the next generation of YAF leaders on the same day that I saw the eagle flying.”

Bristow wrote that he will be replaced by two ultraconservative MSU students who will act as co-chairs. “Western culture has not yielded any territory at Michigan State University since I served as the chairman of MSU-YAF,” he wrote. “Neither will territory be yielded under the leadership of Matt Ogonowski and Eric Thielman.”