Alabama State Sen. Charles Bishop (R-Jasper; photo at right) was the keynote speaker at the 2008 Council of Conservative Citizens (CCC) Leadership Conference held on June 21 in Sheffield, Ala. The CCC was founded in 1985 using the mailing lists of the pro-segregationist White Citizens Councils that fought integration during the civil rights movement of the 1950s and 1960s. The CCC’s website and publications are filled with crude, racist attacks on immigrants, blacks and gays. The CCC is so extreme that in 1998 the then-head of the GOP, Jim Nicholson, took the unusual step of asking party members to resign from the group because of its “racist views.” 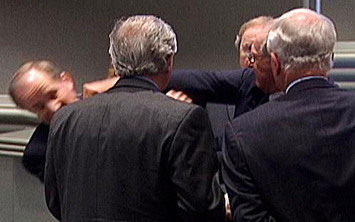 Bishop rose to national infamy last summer when he punched (above) Sen. Lowell Barron (D-Fyffe) on the Alabama Senate floor on June 7, 2007, the last day of the legislative session. Bishop told the CCC that his mother was the “sweetest, most wonderful woman” he ever knew and, when Barron called him a “son of a b----,” he just lost it. Bishop told the CCC that he regretted punching out Barron on the floor of the legislature. Instead, he said, “I should have taken him outside and kicked the hell out of him.” Barron denied calling Bishop a son of a b----.

Bishop was invited to the white supremacist conference by longtime racist activist and Alabama CCC chieftain Leonard “Flagpole” Wilson, who earned his nickname in 1956 when he was a key figure in violent demonstrations against the admission of Autherine Lucy as the first black student at the University of Alabama. Leading chants of “Keep ’Bama white!” from atop a flagpole and shouting racist jokes, Wilson led riotous students through two terrifying nights of racial unrest. Wilson’s activism didn’t stop there. He was prominent in the White Citizens Councils and, in 1985, became a founder of the CCC.

Bishop’s speech appealed to the assembled CCC crowd, particularly when he denounced the idea that Southern states should apologize for having sanctioned slavery. Bishop asked the audience why he should apologize for something that happened years ago. He said that “atonement equals reparations” — meaning that apologies would surely be greeted with demands for financial payback by black Americans. Bishop added that he’s going to vote for John McCain, and not Barack “Hussein” Obama, as he described the presumptive Democratic nominee. Bishop received a standing ovation from the audience and he and his wife posed for pictures with members afterwards.

Bishop is not the only politician to have pandered to the CCC. In 2005, the Intelligence Report revealed that George Wallace, Jr., an Alabama Public Service commissioner and son of the late segregationist Alabama governor, had spoken at the group’s summer conference. And in 2004, the Report reported that 26 public officials, nearly all republicans and Mississippians, had spoken to the group since it was denounced by Nicholson.