Notorious white supremacist lawyer Kirk D. Lyons has thrown his hat in the ring again for a spot on the Sons of Confederate Veterans (SCV) General Executive Council, the national governing board for a group representing male descendants of Confederate veterans. Lyons, who was married at the neo-Nazi Aryan Nations compound by that group’s now deceased leader Richard Butler and who has a lengthy personal history of racist activities that includes past membership in the neo-Nazi National Alliance, is running for the post of councilman for the Army of Northern Virginia (ANV), the largest of the SCV’s three geographical divisions. Lyons is a past commander of the I.N. Giffen Camp, located in his hometown of Black Mountain, N.C. 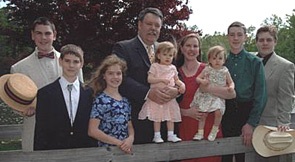 In his campaign platform, Lyons (above, with family, in photo released with his campaign announcement) aims to turn the 20,000-odd member organization into one with a million. Perhaps he will do so by loosening standards. In a 2004 E-mail to SCV members, Lyons wrote, “Mere Klan membership should not be sufficient to remove a member.” What he says explicitly in his campaign announcement is that he hopes to use his position to reverse the outcome of the Civil War: “I look forward to being part of a gathering of eagles at Elm Springs [the SCV’s Tennessee headquarters] to lead the SCV to the victory our ancestors were denied — a victory that with God’s help we can and must secure for our posterity.”

Since the late 1990s, Lyons’ plan has been to turn the SCV into an arm of the radical right, something he made clear during a speech to the racist American Friends of the British National Party in 2000. In a videotape obtained by the Intelligence Report, Lyons talked about how a group of “unreconstructed Southerners” or “white trash,” including himself, had helped to move the SCV increasingly towards a white “nationalist perspective.” “The civil rights movement I am trying to form seeks a revolution,” Lyons told his extremist colleagues that day. “We seek a return to a godly society with no Northernisms attached to it — a majority European-derived society.”

Lyons’ initial involvement in the SCV came to light when he was elected as ANV councilman for a two-year stint in 2000. At the end of 2001, Lyons announced his candidacy for the even higher SCV post of commander of the ANV region, a traditional stepping stone to the SCV’s highest post, commander in chief.

Lyons’ run for ANV commander sparked a long-running internal battle between racist and non-racist factions (described by the racists as the “lunatic” and the “granny” factions, respectively) for control of the SCV, the country’s leading Southern heritage organization. Prominent SCV members spoke out against Lyons and North Carolina member Gilbert Jones, who was later thrown out of the group for seeking an explicit anti-racist membership policy, told CBS News on the eve of the SCV elections that “we ought to take the neo-Nazis, the white supremacists, and the skinheads and show them to the door.” Lyons lost the race for ANV commander by a handful of votes, but, in a devastating defeat for those hoping to cleanse the SCV of racism, his close ally, South Carolinian Ron Wilson, won the top post of overall commander of the SCV. (Wilson was then on the board of Lyons’ Southern Legal Resource Center, which has received funds from the SCV to pursue cases defending the display of Confederate symbols.)

Wilson’s term, during which Lyons served in the appointed post of Judge Advocate General, was marked by a campaign to purge the SCV’s ranks of anti-racists, and hundreds were ultimately thrown out. The dispute ultimately led the Military Order of Stars and Bars, the SCV’s long-time partner organization for the descendants of Confederate officers with which it long shared office space in the SCV’s Elm Springs headquarters mansion, to sever its ties with the group. Many prominent SCV members quit; other sued, unsuccessfully, to wrest the group from Wilson, Lyons and their allies.

On an SCV E-mail list in 2005, Lyons celebrated, perhaps a bit prematurely, the victory of the radical faction in the SCV civil war. “The slackers and the grannies have been purged from our ranks,” Lyons exulted. Now, Lyons added, the SCV needed to become “a modern, 21st century Christian war machine capable of uniting the Confederate community and leading it to ultimate victory.” If Lyons is elected to the SCV’s board, he may well be in a position to help complete the transformation of the SCV into a “war machine” that welcomes racists.