In honor of the holiday, the Hatewatch staff dug deep into our photo archives to unearth the creepiest image to crawl out of the white supremacist movement in quite some time. Here you go: 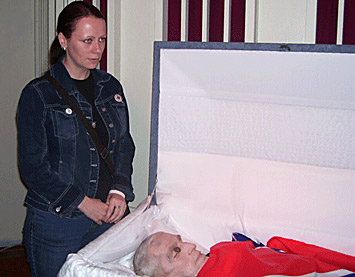 Though it resembles a promotional still from the 1960 horror flick “The Brides of Dracula,” starring Peter Cushing, the photo (which apparently circulated among white supremacists on the Internet) actually shows Women for Aryan Unity activist Victoria “Vickie” Cahill standing over the embalmed (we hope!) corpse of David Lane, one of the inner-circle members of the Bruders Schweigen, or Silent Brotherhood, a white nationalist terrorist organization also known as The Order.

Like a lot of white nationalists, especially incarcerated ones, Lane was deep into racist neo-paganism, so we’re assuming the coins on his eyes are meant for Charon, the mythical ferryman of Hades, who transports newly deceased souls across the river Styx. Lane was a great promulgator of Wotanism, a racist form of Odinism, which was practiced by Norsemen in the Middle Ages. (The flag on his body appears to be that of Norway, where Odinism was once practiced.)

The exact date and location of the photo are unknown, though it’s a good bet it was taken in or near Kalispell, Mont. within a few days of Lane’s death in prison on May 28, 2007, while he was serving a 190-year sentence for racketeering and conspiracy related to the 1984 assassination of Jewish talk radio host Alan Berg. Lane drove the getaway car after an accomplice machine-gunned Berg to death as he stood in the driveway of his own Denver area home.

Not long before he died, Lane, who was suffering from cancer, arranged for his body to be released to neo-Nazi stage mom April Gaede. Lane frequently corresponded with Gaede, who encouraged his infatuation with her teenage twin daughters, who were 54 years his junior. Lane referred to them as his “fantasy sweethearts.”

Gaede arranged for Lane’s corpse to be transported from the federal prison in Terre Haute, Ind., where he died in his cell, to her home in Kalispell, Mont, and then announced that she “and the gals from WAU [Women for Aryan Unity]” had established a David Lane Memorial Fund to cover the expenses of interring Lane’s remains.

According to Gaede, Lane told her that he wanted to be cremated and have his ashes placed in the capstone of a pyramid monument. It seems that was a bit outside Gaede and the WAU’s price range. Gaede posted on the racist online forum Stormfront that “[s]ince we are not in a situation to build a monument in a White homeland,” she was planning to instead distribute Lane’s ashes among 14 miniature pyramids to be enshrined in the homes of 14 white nationalist women. This was a tribute to Lane’s coining of the “14 Words,” the white nationalist catchphrase that goes, “We must secure the existence of our people and a future for White children.” (Two skinheads who were arrested earlier this week for allegedly plotting to rob a gun store and then attempt to assassinate Barack Obama reportedly told police they intended to honor the 14 Words by cutting the heads off 14 African Americans.)

Lane was reportedly cremated in early June 2007 after a private ceremony near Kalispell. Since then, Gaede has started feuding with Cahill and other members of the Women for Aryan Unity.

“They came to my home and were treated as honored guests and sisters. I cooked them dinner and loaded them with gifts before they left. What followed was that I was stabbed in the back,” she wrote in a Stormfront post last month. “I was not the one who used the ‘cadaver’ to try to show off at WN [White Nationalist] events. I have not done anything public with the remains other than send them out in the urns as promised. For this I have been treated like crap.”

The cause of the feud is murky from reading Stormfront, but seems to have something to do with accusations that Gaede is misusing the copyrights to Lane’s writings, which he bequeathed her.

“It is unfortunate that some people on this board and other boards have decided to badmouth and undermine those of us whom David entrusted with his work and his remains,” Gaede wrote in a Sept. 27 post. “David would be ticked off at you if he knew that you were doing this to us.”

Meanwhile, Cahill has raised the ire of another prominent female in the white nationalist movement — Abby Chelf, the wife of Randal Krager, leader of the racist skinhead gang Volksfront — by distributing an essay that was harshly critical of Christian Identity, a bizarre racist interpretation of the Bible that is practiced by as many as 50,000 white nationalists, including Chelf.

Titled “Christian Identity, The Synagogue of Satan,” the essay called Christian Identity practitioners “direct enemies of our folk and our Heathen roots” and “a weed that needs to be viciously ripped out.”

Judging by the blistering responses on Volksfront’s website, it’s safe to say Chelf and her fellow Volksfront skins are looking to smash Cahill’s pumpkin.