David Duke revealed this about himself last Saturday: He’s no whiz at math. Or logic.

Speaking to the faithful at a conference of his European American Unity and Rights Organization (EURO), Duke said that while nobody is for lynching, liberals have falsely portrayed the history of the gruesome practice. Contrary to popular belief, Duke said, most of the roughly 5,000 people he said were lynched in this country were white. Then he said as many as half of the victims were black.

Between 1882 and 1968, there were 4,743 lynchings in the United States, and 3,446 of the victims were black, according to the Archives at Tuskegee Institute. That means nearly 73 percent of those lynched were black.

None of the diehards at the EURO conference questioned Duke’s figures. They were too busy congratulating one another for even having a conference. For a while last week it appeared that Duke’s fans might not get to hear his wisdom on lynching and other racial issues. It even appeared Duke might end up sleeping on a bench at a Greyhound station or under a tree in a city park.

EURO initially scheduled a conference Nov. 7-9 at a hotel and resort in Olive Branch, Miss., near Memphis. The hotel booted the group out on Nov. 4, citing safety concerns as a result of the furor created by the Duke group’s planned appearance.

Duke’s co-organizer of the event, James Edwards (pictured with Duke below), host of radical-right Memphis radio show “The Political Cesspool,” was so traumatized by this development that “my body literally went into a convulsive state,” he wrote on his program’s website. “I can remember gagging while I was on the phone with David as we tried to determine what our options were. The stress was nearly more than I could bear.” Meanwhile, Duke’s notoriety got him ejected from three hotel rooms, according to Edwards. 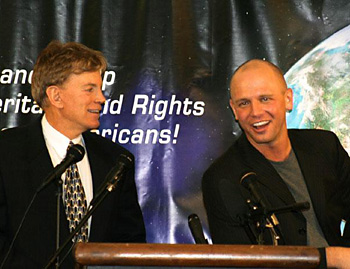 Eventually Duke found a hotel for the conference and himself. He kept it a closely guarded secret lest they be banished again. EURO organizers and volunteers called those with reservations with the new location – the Memphis Plaza Hotel & Suites, about 15 miles from downtown – and informed them that they would now have to make their own hotel arrangements. And the three-day gathering was shortened to one day – Nov. 8. “We have succeeded,” Duke declared at the conference “We have triumphed.”

About 200 of the more than 300 people who had planned to attend did so, according to Edwards. A Memphis TV station estimated the number to be 75 to 100 participants. Video shot in the hotel meeting room seems to support the smaller estimate. Even so, “never before have I been so proud of our People,” Edwards wrote.

Duke and his colleagues portrayed themselves as martyrs persevering for the preservation of their race. Those attending heard speakers who included Edwards, former Alabama Klan leader and white supremacist website founder Don Black and Duke, of course.

Duke bemoaned the “national celebration” that ensued after black teens attacked a white teen in Jena, La. nearly two years ago. That assault was preceded by a series of racially charged incidents, including the hanging of nooses from a tree in a courtyard at Jena High School.

The hangman’s noose is a powerful symbol in Duke’s home state of Louisiana, which trails only Mississippi, Georgia and Texas in the greatest number of lynchings, according to the Tuskegee archives. Although Duke claimed at the EURO conference that most of the people who were lynched were “guilty of terrible crimes,” lynching in fact has been widely recognized as a way for whites at one time to punish and control blacks through intimidation, especially in the South.

Racially motivated vigilante murder was even sanctioned by elected officials such as former South Carolina Governor and U.S. Senator Ben Tillman who in 1892 said he would “willingly lead a mob in lynching a Negro who had committed an assault on a white woman.” And by Sen. Thomas Heflin of Alabama who in 1930 said, “Whenever a Negro crosses this dead line between the white and the Negro races and lays his black hand on a white woman, he deserves to die.”

As usual, Duke carefully steered clear of any such explicitly racist or violent rhetoric in his address to the EURO crowd. Instead, to loud cheers and applause, he promised a bright future for people who share his racial views.

“We are going to have a tremendous movement in this country for our organization and people’s rights and destiny and heritage and freedoms,” Duke told them. “Just the same way you have groups such as the NAACP … people from the ADL … we’re going to have the biggest organization of any group in the United States for our people.”