Federal prosecutors announced today that Bill White, arguably the most important neo-Nazi leader in America, has been indicted on seven counts related to making Internet and other threats that could bring him 55 years in prison and $1.75 million in fines.

White was already being held in a federal holding facility in Chicago, where he faces an earlier charge of obstructing justice for publishing personal information about a jury foreman on his website. White suggested in that posting that the juror had committed a crime by voting in 2004 to convict another neo-Nazi leader, Matt Hale, for soliciting the murder of a federal judge. (The judge was not harmed.) Trial on that charge has been set for March 3 in Chicago federal court.

Bond was denied to White in two earlier hearings. In the most recent, on Dec. 5, a judge said White would be held "to ensure the safety of the community." 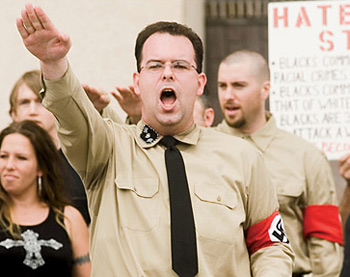 In recent years, White has developed a reputation as a blustery threatmaker, posting personal information such as home addresses and phone numbers of many individuals — including the author of this blog posting — and, in some cases, suggesting that it would be good to kill them. He was known for pushing First Amendment protections to their absolute limit, although the indictments suggest that he was not careful enough to prevent the lodging of extremely serious charges.

Prosecutors in Roanoke, Va., where White lives and where the new indictments were brought, suggested that the additional charges would help stem the tide of Internet threats. “The Internet has proven to be a powerful force in our daily lives. It has made information from across the globe available at the click of a mouse,” Acting U.S. Attorney Julia Dudley said today. “The law enforcement community cannot allow individuals to unlawfully threaten anyone, in any manner. When violent threats are made, legal action must be taken and justice must be served.”

• Threatening a Citibank employee he was having a dispute with.
• Attempting to extort that Citibank employee by demanding she send him a certain legal document related to the dispute.
• Attempting to prevent court testimony through threatening letters sent to black tenants in a housing dispute in Virginia Beach, near his hometown of Roanoke.
• Threatening Leonard Pitts, a black Miami Herald columnist. (The indictment does not identify victims, but several have been known for months.)
• Threatening a professor who administered a diversity training program at the University of Delaware in Newark.
• Threatening Richard Warman, a Canadian civil rights lawyer who has brought actions against numerous white supremacists in that country.
• Threatening the South Harrison Township, N.J., mayor, a black man who has been subjected to other threats in the past. White apparently read about a Town Council resolution offering a reward for information about those people who earlier threatened the mayor and was enraged.

"I'm very relieved," Warman said after being informed by Hatewatch of the new indictments. "Having someone repeatedly counsel people to murder you is a grave cause for concern, especially when it's connected to your home address. It’s been a long two-plus years. I’m very much looking forward to the legal process running its course."

White founded his group, the American National Socialist Workers Party (ANSWP), in 2006, after quitting another neo-Nazi organization, the National Socialist Movement (NSM). Today, the NSM is the only other major neo-Nazi group in America besides ANSWP, which is believed to have fewer than 150 members. Just a few years ago, there were three additional major neo-Nazi groups — the Aryan Nations, the World Church of the Creator (renamed the Creativity Movement after a non-racist church of the same name sued), and the National Alliance — but all three have virtually disappeared in recent years as their leaders have died or been sent to prison.