Amir Abdel Malik Ali, a Muslim cleric who frequently speaks on California campuses, falsely claimed last week that the law would prevent Americans from expressing negative views about Israel or Jews. As Ali tells it, none other than “the Zionists” are behind this attempt to crush free speech. 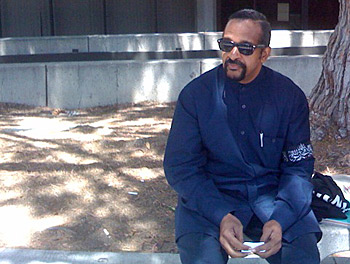 In fact, Ali asserted that those who question that 6 million Jews died in the Holocaust could go to prison under the proposed law. What’s more, “If you talk about the disproportionate numbers of Jews, Zionist Jews, in the media, in finance and foreign policy, that’s a crime. That’s a crime! So what you’re talking about, if this bill is passed, is that you can criticize any country in the world except the apartheid state of Israel. That’s under the Hate Prevention Act of 2009 [sic].”

While Ali’s diatribe received applause, it’s completely untrue. The Matthew Shepard Hate Crimes Act would not curtail any of the free speech rights that Americans currently enjoy, including the right to deny the Holocaust or trot out anti-Jewish canards. Rather, the act would increase funding for state and local authorities to prosecute hate crimes, including those based on sexual orientation. It would also allow federal authorities to investigate and prosecute hate crimes when state or local agencies don’t do so.

But Ali, an Oakland imam who was invited to Irvine by the Muslim Student Union, didn’t respond directly to an audience member’s assertion that he’d gotten his facts wrong. During previous speeches on California campuses, Ali has asserted that Zionist Jews control the media and perpetrated the Sept. 11 terrorist attacks — so it’s probably no surprise that he’s promoting falsehoods about the hate crimes bill.

But he does make a strange bedfellow for religious-right anti-gay groups, which are also lying about the proposed legislation. These groups claim that by protecting Americans of all “sexual orientations,” the act would actually extend legal protection to pedophiles and those with deviant (and often illegal) sexual fetishes. This is incorrect; by “sexual orientations,” the act refers only to heterosexuality, homosexuality and bisexuality. Leading religious right organizations also have falsely claimed, in hundreds of thousands of E-mails and other communications to their supporters, that the act would allow authorities to imprison pastors who criticize homosexuality from the pulpit.

Meanwhile, for those who missed him at Irvine, Ali is scheduled to speak at the University of California, Riverside’s Muslim Student Association today.

Center for the Study of Hate and Extremism photo