Shawna Forde, 41, the nativist extremist who was arrested on Friday in Arizona on two counts of first-degree murder, is known as the leader of Minuteman American Defense (MAD), a hard-line group opposed to undocumented immigration. But three years ago, appearing on a televised immigration roundtable organized by a local Public Broadcasting Service (PBS) affiliate in Washington state, Forde was repeatedly identified as a representative of the Federation for American Immigration Reform (FAIR) — an organization that has repeatedly stressed its mainstream credentials and is, in fact, regularly quoted in the media and asked for expert testimony in Congress. The PBS show’s producer told Hatewatch that Forde presented herself as a FAIR representative.

(UPDATE: On Tuesday, June 16, FAIR denied it ever had any association with Forde, writing in a press release that "the SPLC and organizations advocating mass amnesty and open borders" were engaging in a "smear campaign." Forde's claims of a link to FAIR were also written up in several major blogs other than Hatewatch.)

Since late 2007, the Southern Poverty Law Center (which publishes this blog) has listed FAIR as a hate group. Among the reasons: Key staff members of FAIR have ties to white supremacist groups, including writing for their publications and speaking at their functions; the group accepted more than $1 million from a racist foundation dedicated to the study of racial differences in intelligence; its founder’s ties to racists and the racist movement; and other matters detailed here and here.

Earlier today, the Immigrant Rights blog was the first to notice Forde’s appearance on the Nov. 14, 2006, KYVE-TV show. Taped in Yakima, Wash., a city with a large number of Mexican immigrants, the show profiles local immigration advocates and opponents. When the camera rolls on Forde, the host describes her as “a member of the Minutemen and a representative for the Federation for American Immigration Reform, a national group concerned about border security, illegal immigrants and our immigration policies.” In the video, Forde wears glasses and long black hair, noticeably different from her current look of short blond hair and contacts.  She appears just after the five-minute mark, with an identifier that reads, “Minuteman & Activist, FAIR.” 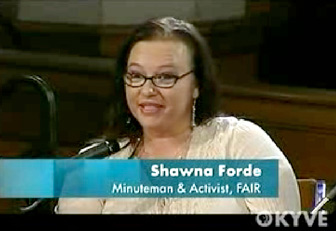 Contacted by Hatewatch, Enrique Cerna, the host of the show and an executive producer, said it’s difficult to remember all the production details of a segment produced three years ago. Still, he said his producers had contacted FAIR, asking for a representative to appear on the show. That representative cancelled at the last minute and was replaced by Forde, who identified herself as a FAIR official. “We wouldn’t have identified her with that organization if she hadn’t said she was speaking on their behalf,” said Cerna. On the show, Forde claims that the state of Washington spends $500 million on illegal immigration. “It’s pretty easy … if you hire somebody who is illegal, it’s a crime,” Forde replied when asked what is to be done about illegal immigration. “What makes this a wonderful nation and one of the greatest nations on earth is we are a nation of laws.”

Forde’s June 12 arrest on two counts of first-degree murder stems from a May 30 home invasion robbery in Arivaca, Ariz., which she allegedly carried out to get drugs and cash to fund her group’s operations. (It’s not known whether the invaders found either cash or drugs.) Shot and killed in the invasion were resident Raul Flores, 29, and his 9-year old daughter Brisenia. Flores’ wife was also shot, but returned fire, wounding Albert Robert Gaxiola, 42, a member of MAD, Forde’s organization. Also arrested on Friday was MAD operations director Jason Eugene “Gunny” Bush, 34, who has been accused by law enforcement of being the alleged triggerman in the murders. Bush was additionally charged today with the 1997 murder of a Latino man in Wenatchee, Wash. According to the Wenatchee, Wash., police, Bush, "had long standing ties to Aryan Nations groups that commonly believe in white superiority over other races and have been known to be violent towards non-white races."