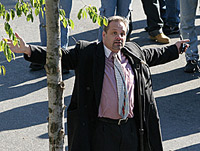 Hal Turner, a neo-Nazi talk radio host known for his threats against public
figures, was denied bail during an appearance in federal court Thursday
afternoon on charges of threatening to assault and murder three federal
judges. Also at the hearing, FBI officials revealed that they'd found 200
rounds of ammunition and 150 illegal hollow point bullets in Turner's home during a search on Wednesday, according to the Jersey Journal.

Turner's arrest comes three weeks after he was taken into custody in New Jersey on charges that he incited violence against two Connecticut legislators. He had been freed on $25,000 bond and wasn’t scheduled to return to court until July.

But the FBI — an agency for which he once may have worked as a paid informant — arrested Turner on Wednesday after going to his home in North Bergen, N.J., to execute a search warrant. The charges stem from Internet postings earlier this month in which he blasted a June 2 decision by the 7th U.S. Circuit Court of Appeals in Chicago that essentially upheld local handgun bans.

The blog posts named Chief Judge Frank Easterbrook, who wrote the unanimous decision, along with Judges Richard Posner and William Bauer. “Let me be the first to say this plainly: These Judges deserve to be killed,” Turner allegedly wrote on June 2. He later posted the photographs, phone numbers, work address and room numbers of the three judges, as well as a modified photo of the Dirksen Federal Courthouse where they work that reveals the locations of “anti-truck bomb barriers.” He also posted a map showing how to get to the building, according to the FBI.

In the June 2 blog post titled in part “OUTRAGE: Chicago Gun Ban UPHELD,” Turner states that the same federal appeals court that made the handgun decision also upheld the 2004 conviction of Matt Hale, a white supremacist now serving a 40-year sentence for soliciting the murder of U.S. District Judge Joan Lefkow. Turner also noted that a gunman killed Lefkow’s mother and husband in her home. “Apparently, the 7th U.S. Circuit Court didn’t get the hint after those killings,” he allegedly wrote. “It appears another lesson is needed.”

Turner, 47, isn’t the only neo-Nazi whose cyberspace comments on the Hale case have helped lead to criminal charges in Chicago. Bill White of Roanoke, Va., the leader of the American National Socialist Workers Party, is scheduled for trial next month in federal court in Chicago on obstructing justice charges related to his alleged encouragement of violence against the foreman of the Chicago jury that convicted Hale. White posted the name, home address, phone numbers and other personal information of the “Gay, Jewish, anti-racist” juror last September. White wrote that the juror “played a key role in convicting Hale.”

If Turner is convicted, he faces up to 10 years in prison and a $250,000 fine. “We take threats to federal judges very seriously. Period,” said Patrick J. Fitzgerald, U.S. Attorney for the Northern District of Illinois.

Turner has made numerous racist and violent threats. In 2007, he railed against President George W. Bush, saying that “a well-placed bullet can solve a lot of problems.” He has written that “we need to start SHOOTING AND KILLING Mexicans as they cross the border.” In 2006, he published an attack on New Jersey Supreme Court justices that included several of their home addresses. Just before President Obama’s inauguration, he suggested that the mass murder of those attending the event “would be a public service.” Most recently, he was charged on June 3 with inciting injury to persons or property after he posted a blog entry that encouraged readers to “take up arms” against two Connecticut lawmakers, Sen. Andrew McDonald and Rep. Michael Lawlor. Turner was upset about state legislation that would give more power to the laity in the Roman Catholic Church.

In January 2008, unidentified hackers posted E-mail correspondence between Turner and an FBI agent who appeared to be his handler in the forum of Turner’s website for his radio program, “The Hal Turner Show.” The FBI last year declined to comment about Turner’s relationship with the agency.

Larry Keller contributed to this report.