A string of attacks against Muslims and their religious centers has broken out over the past few weeks, apparently inspired by the protests in New York City over the planned Muslim community center and mosque near where the 9/11 attacks took place. Leaders of those protests have repeatedly made hateful statements against Muslims and Islam, with the National Republican Trust Political Action Committee, for example, saying the center is meant “to celebrate [the] murder of 3,000 Americans." 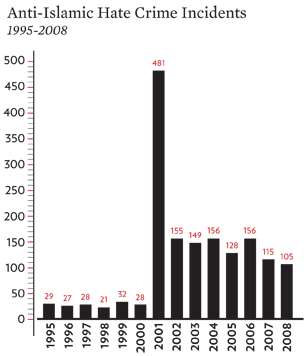 The most violent of these attacks took place on Tuesday in New York City, when 21-year-old film student Michael Enright allegedly attacked a cab driver. Police said that Enright cursed out the cabby after asking him if he was Muslim and then slashed his throat and stabbed him in several places when he answered in the affirmative. Enright was charged with hate crimes on Wednesday.

In California also on Tuesday, Imam Abdullah Salem arrived at the Madera Islamic Center to find two menacing signs, one of which read, “Wake up America, the enemy is here.” It was the latest in a recent string of attacks on the center, including a brick thrown at the building on Sunday and a sign posted the prior week that read, “No temple for the God of terrorism at Ground Zero.”

These incidents are just the latest in a series of anti-Muslim attacks that have taken place over the course of the past year. On May 12, a Muslim community center was firebombed while filled with people. Approximately 60 worshipers were at The Islamic Center of Northeast Florida in Jacksonville when a pipe bomb went off around 9:35 p.m. It caused a small fire in the back of the building, but no one was injured. The FBI released surveillance video of what appeared to be a middle-aged white man carrying a gasoline container in the area of the bombing. Investigators believe he is connected to the attack. Another surveillance video was released that showed a different man who entered the mosque April 4 and shouted anti-Islam epithets. Neither man has been found.

The FBI statistics are known to severely understate the total number of hate crimes. According to a Department of Justice study, the real level of reported and unreported hate crimes is between 20 and 30 times higher than the numbers that are published. However, the trends the numbers show are believed to be accurate.

For more on recent anti-Muslim violence, read our recent round up in the Intelligence Report.