Saul Anuzis, leader of the Michigan GOP until last year, announced earlier this week that he would be challenging Michael Steele for the chairmanship of the Republican National Committee (RNC). Anuzis had made a failed but significant run against Steele, the party’s first black leader, for the same post in 2009.

Writing about his hopes for the RNC, Anuzis, an avid Twitter user and blogger, especially emphasized his tech-savviness at online social networking as an asset for making electoral gains for the party. What Anuzis didn’t mention was the kind of contacts he cultivated offline in Michigan, in particular his vocal support of the right-wing extremist Kyle Bristow. Bristow led the Michigan State University campus branch of Young Americans For Freedom (MSU-YAF) and was so virulent in his politics that the Southern Poverty Law Center (SPLC) began listing it as a hate group in 2006. Bristow also served as a Republican precinct delegate. 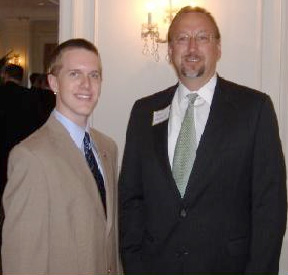 Bristow’s MSU-YAF engaged in extensive racist activities. One of its first stunts was presenting a 13-point agenda that would have established a “Caucasian caucus” at MSU and, in turn, eliminated all student government representation for practically every other non-white, non-heterosexual, non-male or non-Christian student group at the university. Bristow was on record saying, “Homosexuality kills people almost to a degree worse than cigarettes. … these [pro-gay rights] groups are complicit with murder.” MSU-YAF sponsored a “Catch an Illegal Immigrant Day” contest, held a “Koran Desecration” competition, jokingly threatened to distribute smallpox-infested blankets to Native American students, and posted “Gays Spread AIDS” flyers across campus. Bristow’s YAF also brought several extremists to speak at the MSU campus, including Holocaust denier Nick Griffin, leader of the whites-only British National Party (for more on YAF, read here).

None of this seemed to bother Anuzis. “This [Bristow] is exactly the type of young kid we want out there,” Anuzis, then already the GOP state chair, said on a radio program in May 2007, the year after MSU-YAF’s more outrageous activities were made public. “I’ve known Kyle for years and I can tell you I have never heard him say a racist or bigoted or sexist thing, ever.” Just this past October, Anuzis’ Michigan GOP issued a press release attacking a Democratic candidate for secretary of state because she once interned at the SPLC, which the release said used “fear and intimidation” in its hate group listings.

Since receiving this outpouring of support from Anuzis, Bristow has graduated to the top ranks of the American radical right. Now a law student at the University of Toledo, Bristow recently self-published a novel, White Apocalypse, whose plot revolves around a series of violent revenge fantasies against Jewish professors, Latino and Native American activists. A major subplot ends in the bloody assassination of a character apparently based on an SPLC staffer. Several notable white supremacists and anti-Semites have endorsed the novel.

Attempts to reach Anuzis to discuss Bristow were unsuccessful.