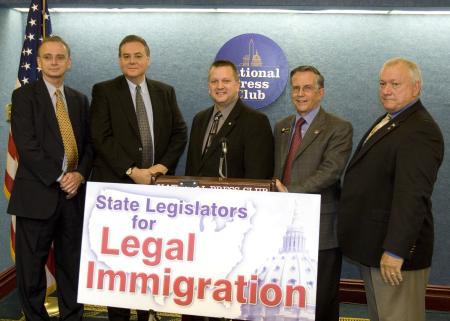 On Wednesday, legislators from the anti-immigrant organization State Legislators for Legal Immigration (SLLI) will announce at the National Press Club their plan to halt what they call “the misapplication of the 14th Amendment.” The group seeks to end the amendment’s provision of birthright citizenship, which assured that the children of slaves could not be denied citizenship, and ensures that almost all children born on U.S. soil are automatically granted American citizenship.

Children born to the undocumented have long been a bugaboo for the anti-immigrant movement, which derisively refers to these new American citizens as “anchor babies” – purportedly used by their parents to gain U.S. citizenship for themselves.

SLLI is a coalition of about 70 legislators in 38 states dedicated to eliminating “economic attractions” for immigrants and their “unlawful invasion” of the U.S. SLLI leader Daryl Metcalf of Pennsylvania has a long history of making nasty anti-immigrant comments, including referring to undocumented immigrants as “foreign invaders” and their children as “anchor bab[ies].” In October, Metcalf announced a new SLLI task force to attack birthright citizenship. “This ongoing distortion and twisting of the 14th Amendment greatly incentivized foreign invaders to violate our border,” Metcalf said at an October press conference.

This harsh rhetoric isn’t surprising given the relationship between Metcalf, SLLI and the anti-immigrant hate group, Federation for American Immigration Reform (FAIR). SLLI is often described as the legislative arm of FAIR, which is apt given the group says on its website that it has a “working partnership” with FAIR. SLLI’s legislators are the main instigators behind favored FAIR initiatives, including attempts at the state level to deny immigrants various rights through laws modeled on Arizona’s S.B. 1070.

Written by FAIR lawyer Kris Kobach and passed last April, S.B. 1070 is a harsh anti-immigrant measure that makes the failure of non-citizens to carry immigration documents a crime and obligates police to check immigration status when there is “reasonable suspicion” that someone is undocumented. It is currently held up in federal court, as are many anti-immigrant laws originally written and promoted by FAIR.

FAIR’s designation as a hate group by the Southern Poverty Law Center is well deserved. FAIR’s founder and chief ideologue, John Tanton, has repeatedly questioned the “educability” of immigrants. He has corresponded with Holocaust deniers, former Klan lawyers and the leading white nationalist thinkers of the era. He introduced key FAIR leaders to the president of the Pioneer Fund, a white supremacist group set up to encourage “race betterment,” at a 1997 meeting at a private club. He encouraged a major financial supporter to read the work of anti-Semitic professor Kevin MacDonald — to “give you a new understanding of the Jewish outlook on life” — and suggested that the entire FAIR board discuss the professor’s repugnant theories on the Jews.

Tanton went so far as to propose creating a “League for European-American Defense, Education and Research” or LEADERs, to use Tanton’s acronym. LEADERs would defend “ourselves and our tradition against attacks,” counter “the denigration of Western culture” which Tanton wrote is “under siege,” and stop the “reduction of the European-American demographic and cultural majority to minority status.” (For more on Tanton’s anti-immigrant racism, read here).

But Tanton, who has been steadfastly defended by FAIR’s leadership, isn’t the only FAIR leader to bash immigrants or cavort with racist organizations. Dan Stein, the group’s president, has warned that immigrants are engaged in “competitive breeding” aimed at diminishing white power. He has also said that, “Immigrants don't come all church-loving, freedom-loving, God-fearing…Many of them hate America, hate everything the United States stands for.” Stein also described the 1965 Immigration Act, which ended the racial quotas that had restricted American immigration to Northern Europeans, as “a key mistake in national policy” and a “source of error.”

FAIR’s history of racism is far more extensive than described here. Prominent FAIR staffers have held membership or written for other hate groups, in particular the Council of Conservative Citizens, which has described African Americans as a “retrograde species of humanity.” The group has received funding from the neo-Nazi Pioneer Fund. (For a full accounting of why the Southern Poverty Law Center lists FAIR as a hate group, please read here.)

Apparently, FAIR’s nasty track record of hate is of no bother to Metcalf or SLLI. Their press conference Wednesday will feature FAIR lawyers Kobach – who is the newly elected secretary of state of Kansas – and Michael Hethmon as speakers.