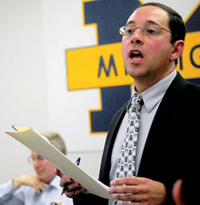 If Andrew Shirvell represents the vanguard in the crusade against the “homosexual activist agenda,” it’s no contest. The agenda has won.

Shirvell (right), a former Michigan assistant state attorney general, essentially trashed his own career by waging a bitter campaign last year against a man he didn’t even know – Chris Armstrong, a 21-year-old, openly gay University of Michigan student who had just been elected the school’s new student government president. Now, Shirvell, a Michigan alumnus, is stretching the credulity of jurisprudence by claiming in a May 6 court filing that he actually is the victim in the fight he provoked – targeted by a reputed “homosexual agenda” often cited by right-wing extremists as seeking to thwart Christianity, destroy the institution of marriage and expand the number of LGBT people through “recruitment.”

Shirvell’s motion seeks dismissal of a harassment lawsuit Armstrong filed against him April 1. According to the Detroit Free Press, Shirvell’s motion claims Armstrong set out “to make an example out of (me) in order to deter others from criticizing (Armstrong’s) homosexual activist agenda.” Armstrong’s lawsuit seeks damages in excess of $25,000.

According to the newspaper, Shirvell contends that Armstrong – whom no one outside the school’s Ann Arbor campus would likely have ever heard about but for Shirvell’s own actions – “has garnered publicity for himself and for his political agenda by trashing me in the media.” He goes on, “The lawsuit is nothing more than Mr. Armstrong’s latest publicity stunt. It is entirely without merit and totally devoid of reality. Mr. Armstrong has suffered no damages. I am confidant that the Court will ultimately throw out Mr. Armstrong’s baseless lawsuit and that my First Amendment rights will be upheld.”

Armstrong’s “homosexual agenda,” evidently, includes his refusal to wilt in the face of the personal attacks Shirvell launched against him beginning with the creation of  “Chris Armstrong Watch,” a website “for concerned University of Michigan alumni, students and others who oppose the recent election of Chris Armstrong – a RADICAL, HOMOSEXUAL ACTIVIST, RACIST ELITIST, & LIAR – as the new head of student government.”

Shirvell in his blog referred to Armstrong as a “privileged pervert” and accused him without evidence of “engaging in sexual escapades at churches and children’s playgrounds.” He called Armstrong “Satan’s representative on the Student Council.” Shirvell showed up at events where he anticipated Armstrong would be (leading the university to ban Shirvell from campus) and even staged protests outside Armstrong’s home, sometimes in the middle of the night.

As a civil servant, Shirvell could not be fired simply for expressing his political views on his own time, although his boss, Michigan Attorney General Mike Cox, said, “[H]is immaturity and lack of judgment outside the office is clear.” A few weeks later, after a disciplinary hearing, Cox fired Shirvell for “conduct unbecoming a state employee” and for using his state computer during office hours to post on  his private blog.

In addition to the lawsuit, Armstrong is seeking to have Shirvell disbarred. “This man is a loose cannon with a law license,” Armstrong’s attorney, Deborah Gordon, told CNN in November. “He should not be practicing law in the state of Michigan. He’s shown himself to be incapable of being a responsible officer of the court.”