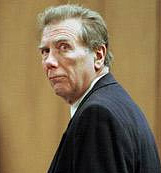 Update: The subject of this story, the man formerly known as Vince Bertollini, comments below that the article is a "typical Jew ploy," among other things.

Recently released after several years in federal prison, Richard Vincent Bertollini has moved across the country and changed his name in order to make “a fresh start.” But the energetic propagandist of yesteryear is still peddling his same brand of vitriolic hatred directed at Jews and the U.S. government.

Bertollini — an ordained minister of the neo-Nazi group Aryan Nations, formerly based in North Idaho — now calls himself “Vince Bert,” Hatewatch has learned. The would-be stealth racist, aiming to shed his Idaho reputation and remain under the radar, recently moved to Albuquerque from Santa Fe, N.M., where he maintains a post office box.

Prison hasn’t changed his thinking much. In a recent Internet posting, the former confidant and key financial supporter of the late Aryan Nations leader Richard Butler calls for a “revolution” and the “shedding of blood” in the United States. Bertollini re-started his Internet hate ministry and book publishing operation in the Southwest just days after being released from prison last year after serving a sentence on a federal firearms charge.

Local New Mexico law enforcement officials contacted this week said they had never heard of him, but are now interested. “We weren’t aware of this,” Lt. Louis Carlos, a commander with the Santa Fe Police Department, said when asked about Bertollini and his new alias. The FBI had no immediate comment.

A decade ago, after moving from California to Sandpoint, Idaho, Bertollini and an associate started a group called the 11th Hour Remnant Messenger that promoted Christian Identity, the theology that was practiced at Aryan Nations. In its most virulent form, which Bertollini embraces, Identity claims that whites are the real descendants of the Hebrews of the Bible; that today’s Jews are the biological descendants of a mating of Eve and Satan; and that people of color are soulless beings created by God along with other “beasts of the field.”

Bertollini has claimed his organization spent $1.5 million to print and mass-mail videos, posters and literature promoting the racist message of his group and the Aryan Nations. At one point, it sent huge posters depicting the byzantine Identity version of the history of the world to virtually every address in an entire northern Idaho zip code.

Bertollini fled Sandpoint and became a federal fugitive in 2001 while facing the likelihood of two years in prison after being arrested a third time for drunken driving in Idaho. When he was finally arrested in New Mexico in 2006, the FBI found a sawed-off shotgun and seven other firearms in his possession. He was prosecuted for weapons violations and sent to federal prison in Florence, Colo., for 41 months.

Bertollini was shocked when tracked down this week. “How in the hell did you find me?” Bertollini sputtered Tuesday when reached by telephone. “Holy mackerel!” he said. “I changed my name and everything and you still found me, and my phone number, no less!” 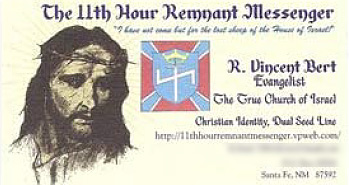 Bertollini then attempted to explain why he had become Bert. “I have no secrets except I didn’t want to drag that name [Bertollini] around,” he said. “What I’m doing, I’m doing on the Internet. I’m astounded that you even found me.”

After getting out of prison, Bertollini said he “needed to make amends” with his estranged wife and family who were not happy with the racist notoriety he gained in North Idaho. Looking for a new start, he said he changed his surname to Bert.

“Why come back and carry that burden around the rest of my life … the burden of Bertollini and all that entails?” he asked. But he didn’t explain how a similar reputation wouldn’t quickly develop as he promotes the same racism under his new name.

Bertollini, who is now 71, said he has gotten part-time employment to supplement his monthly Social Security payments using his new name. Earlier, he said, he had “no opportunity to do that work because of my Idaho reputation and name,” he said. But by using the name Vince Bert, he said, “I’ve passed seven background checks, believe it or not. I give them my right birth date and Social Security number, and I pass them.”

Bertollini now has a couple of websites, including one promoting his brand of Christian Identity through his resurrected 11th Hour Remnant Messenger. He also said he is self-publishing two books, “Crimes and Punishment MMX (or “How the Feds Conspire to Screw You) and a second called, “It’s the Jews, Stupid!”

But he makes no mention of his extremist views on a LinkedIn social networking page where he describes himself as an “independent religious institutions professional.” He also makes no mention there of being the former sidekick to Butler.

Bertollini laughed when reminded of riding with Butler in a late-model convertible during one of several Aryan Nations parades through downtown Coeur d’Alene shortly before Butler’s death in 2004.

During that period, Bertollini was a critically important supporter of Butler. He gave Butler cash for a down payment on a house in Hayden, Idaho, that became the de facto new Aryan Nations headquarters after the Southern Poverty Law Center (SPLC) brought a successful civil suit that resulted in the bankruptcy of Aryan Nations and the demolition of its North Idaho compound in 2000.

“Vince Bert” offered no apology for using the infamous Aryan Nations logo on his new 11th Hour Remnant Messenger home page, even though SPLC once considered court action to gain control of the name. “I put the AN [Aryan Nations] logo [on the Web page] because [SPLC co-founder] Morris Dees thinks he owns it,” Bertollini said. “He owns shit. Screw him. I’m using it; I’ll use it.”

As a matter of fact, SPLC never moved to try to control the name.

As in his prior extremist life, Bertollini today offers up a mix of political vitriol and weird conspiracy theories. His website includes a series of claims, including:

And then Bertollini gets really fired up: “Without revolution, anarchy and the shedding of blood, there is no possibility of restoration of the Republic.”

On a Facebook page, Bertollini describes himself as a friend of the notorious racist and former KKK leader Louis Beam, who was for years an “ambassador-at-large” for the Aryan Nations. Beam now lives in Texas and is relatively inactive.

Bertollini also links his Facebook page to “Friends of Edgar Steele,” a support group for the anti-Semitic attorney who unsuccessfully represented Aryan Nations and Butler in the SPLC’s 2000 civil case. Steele was just convicted by a federal jury in Idaho in a foiled plot to kill his wife and her mother with a pipe bomb because of his infatuation with a far younger foreign woman who he’d met on the Internet. Bertollini said he had written a couple of letters to Steele, who he said had gotten a “raw deal” in the courts. He said he has not heard back from Steele.

Bertollini also attempts to preach his racist messages in a couple dozen YouTube videos — some of which are technological disasters, truncated and, in one case, without sound. Those glitches came from wireless computer problems he has now fixed with a high-speed Internet hookup, he said.

“I do what I got to do,” Bertollini told Hatewatch. “You know, I’ve got to vent, somehow. There are things you have to do, battles you have to fight even if you lose them.”

“I don’t have a forum anymore,” he added. “I’m not doing mass mailings because I can’t afford them or I would be. I’ve just got to stir it up a little bit, you know.”

He said that for a time, he was banking on the Tea Party to carry his ideals “until I saw it was almost a powerless organization. That made me even more vociferous in my rantings,” he said. He now considers the Tea Party a “joke and a hoax.”

He remains on federally supervised release, Bertollini said, and his family and parole officers know about his renewed Internet hate sites “but aren’t happy about them.”

His supervised release ends in February 2013 “and then all bets are off,” he said, declining to say what he will do then. “I’m not out there standing on the corners anymore,” he said, “but I can do my little thing on the Internet. If people cruise by, I might get a convert or two.”