Four members of a secret militia group, now facing murder charges in Georgia, operated inside the ranks of the U.S. Army and discussed blowing up a dam and poisoning fruit crops in Washington State, authorities said Monday. The motives of the alleged plotters remained murky.

The revelation came as Army Pfc. Michael Burnett, 26, struck a plea bargain with prosecutors in Long County, Ga., agreeing to testify against three other soldiers who called themselves the FEAR militia (Forever Enduring Always Ready). 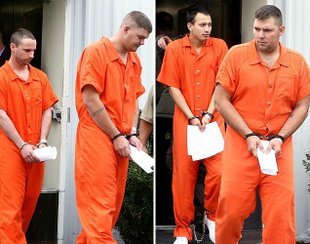 The four soldiers, stationed at Fort Stewart in Georgia, spent at least $87,000 buying guns and bomb components, and now face charges in the execution-style murders last December of former soldier Michael Roark and his 17-year-old girlfriend, Tiffany York. The pair was shot to death in the Georgia woods, near the U.S. Army base. The killers apparently believed the militia group had been betrayed by Roark, who left the military two days before he and York were shot “to be silenced,” The AP reported.

Aguigui, who was home-schooled before being accepted at West Point preparatory school, funded the militia using $500,000 in insurance and benefit payments from the death of his pregnant wife a year ago, The AP reported. Aguigui was not charged, but Long County Prosecutor Isabel Pauley said the young woman’s death “was highly suspicious.” It was not disclosed where she died.

“This domestic terrorist organization did not simply plan and talk,” the prosecutor said at Burnett’s court hearing. “Prior to the murders in this case, the group took action” and possessed the “knowledge, means and motive to carry out their plans.”

In a videotaped interview before he was “separated” from the Army, Aguigui called himself “the nicest cold-blooded murderer you will ever meet,” Pauley said, according to The AP. Aguigui used the Army to recruit militia members who wore distinctive tattoos that resemble an anarchy symbol, the prosecutor said.

The group allegedly conspired to bomb an undisclosed hydroelectric dam in Washington and talked about poisoning the state’s apple crop.

Many of the firearms were purchased at High Mountain Hunting, a gun store in Wenatchee, Aguigui’s father, Ed Aguigui, confirmed today when contacted by Hatewatch. “We don’t talk about any of our customers’ purchases,” an employee at the gun store replied when asked about that today.

Ed Aguigui told Hatewatch that he had “no clue” as to the location of the land in Washington State that reportedly was purchased by his son and members of his militia group. “I served my country for 20 years and I honor that, take pride in that,” Ed Aguigui said when asked about his son’s alleged antigovernment activities. “I don’t know what my son’s views are, and where they came from.”

“The only thing I can say right now is this case is moving from the military to the state courts in Georgia,” Ed Aguigui said. “I don’t think it would be right to say much more at this point.”

The suspect’s grandmother, Gloria Aguigui, of East Wenatchee, Wash., said her large family is from Guam. Annette Aguigui, the suspect’s mother, homeschooled Isaac and his five brothers and sister while their father spent a career as a U.S. Army combat engineer. “When they were little kids, they weren’t even allowed to have guns,” Gloria Aguigui told Hatewatch. “Isaac never got into trouble, and was always helping out. I have no idea what happened.”