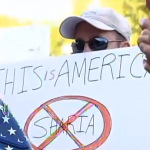 Tennessee has been a hotbed of anti-Muslim activism for years, especially after plans were laid to build an Islamic center in Murfreesboro. There have been bomb threats and numerous conferences centered on the unfounded but widely hyped fear that Shariah law will somehow be imposed on Americans. The chapter of ACT! for America, an anti-Muslim extremist group, based in Nashville is the most active in the country.

So perhaps it was to be expected that a community forum intended to foster dialogue and a greater understanding of Muslims in America degenerated into a hate-filled free-for-all on Tuesday night.

The event in Manchester was organized by the American Muslim Advisory Council after a Coffee County, Tenn., commissioner posted a cartoon to his Facebook page last month showing a man aiming a shotgun and the words, “How to wink at a Muslim.”

“This night was supposed to be about understanding the Muslim-American community,” Sabina Mohyuddin, a spokeswoman for the council, told Hatewatch. “[But] during the whole program, from the beginning to the end, protestors were heckling, interrupting, shouting out.”


The forum drew 600 people, far exceeding expectations of 100. Audience members shouted down speakers and accused others of violating their freedom of speech.

Meanwhile, outside the convention center, Robert Spencer of Jihad Watch and Pamela Geller of Stop the Islamization of America gave speeches accusing the Obama administration of trying to “shut down speech deemed ‘inflammatory’ against Muslims.”

“American’s aren’t going to sit quietly while our freedom of speech is taken away, and are never, ever, going to submit and stop telling the truth about the jihad that threatens us all,” Geller said after the event. “We are an army.”

The irony was that speeches from U.S. Attorney Bill Killian and Kenneth Moore, FBI special agent in charge of the Eastern Tennessee District, were focused on the very freedoms ensured by the First and 14th Amendments. “Our presence here tonight has generated some controversy,” Moore told the audience. “People think we want to step on and stifle their First Amendment rights. Nothing could be further from the truth.”

At one point, the anger inside the convention center grew so intense that the FBI decided to end the forum early because of concerns that the crowd would grow uncontrollable, Mohyuddin said.

Anti-Muslim sentiment has grown for many years in Tennessee, prompted in part by the work of activist groups like ACT! for America and opposition to the planned Islamic Center in Murfreesboro. Hardline ideologues associated with the anti-Muslim movement have long believed that the mosque would serve as a base of operations for the Muslim Brotherhood.

But until now, the dialogue has never reached such rancor, according to local resident Elaine Smith. She told The Tennessean that at many times during the evening, she was frightened of the other audience members.

“I came here because I wanted to learn something … but I couldn’t hear because the audience was so disrespectful,” Smith said. “I cried when I got here. It makes me really sad especially because these people say they’re Christians. The God I worship doesn’t teach hate.”