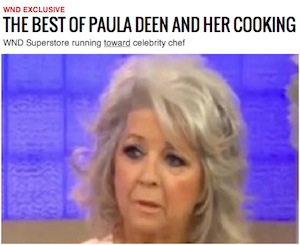 Paula Deen has had a crummy couple of weeks.

Since it emerged in late June that the celebrity chef has used offensive racial slurs, is fond of racist and anti-Semitic jokes, yearned to host a “real Southern plantation” wedding featuring black waiters tricked out as slaves, and doesn’t particularly mind if her employees watch pornography at work, Deen’s sponsors have dropped her like the hotcakes she’ll no longer be shown making on The Food Network. Wal-Mart, Target, Smithfield Foods, and pharmaceutical company Novo Nordisk have cut ties with Deen, and on June 28, Ballantine Books canceled a multi-book contract, despite high presale numbers for Paula Deen’s New Testament: 250 Recipes, All Lightened Up.

But where some brands see a liability, WorldNetDaily (WND), the far-right supermarket tabloid of the Internet, sees an opportunity.

In a July 3 E-mail blast, WND announced exciting deep discounts on patriotic accoutrements and books about God’s plan for America (including a reboot of pseudo-historian David Barton’s The Jefferson Lies, which portrays Thomas Jefferson, a slave-owner and deist who famously questioned the divinity of Jesus Christ, as an ultra-Christian champion of civil rights), and, of course, Paula Deen’s Southern Cooking Bible.

“The rest of the media and corporate world may be running away from Paula Deen. ... But the WND Superstore is running toward her,” burbled a “WND Exclusive” advertorial published on July 1. “She’s been abandoned by her TV network, Walmart, Target – even the publisher of her upcoming No. 1 bestselling book in the country. … So what is the politically incorrect WND Superstore doing? Stocking up on everything Paula Deen.”

WND is doing more than just adding Deen’s recipe books to its emporium of Armageddon- and antigovernment “Patriot-” themed paraphernalia. Since news of her racist indiscretions broke, the Internet tabloid has run almost daily articles lauding the celebrity chef and excoriating her detractors, with headlines like, “Paula Deen, Tell ’Em All to Go to Hell,” “The Deen Destruction Derby,” and “Black Racism Killed Trayvon … and Paula Deen’s Career.”

This last item, linking Deen’s ostracism with the ongoing murder trial of George Zimmerman, a Sanford, Fla., neighborhood watch volunteer charged in the shooting death of unarmed black teenager Trayvon Martin, was authored by regular WND columnist Jesse Lee Peterson, a black minister and radio personality who once thanked God for slavery and has said that most black people “lack moral character.”

“I’ve been warning for the past 23 years that black racism is out-of-control – it appears black racism killed Trayvon Martin, and Paula Deen’s career!” wrote Peterson in his July 2 rant. Blacks and whites, wrote Peterson, must stand up to “race hustlers” and “thugs” before “racial intimidation” – by blacks – becomes the norm. “I hear from many white people that they’ve given up on trying to help or deal with blacks,” Peterson wrote. “If they hire blacks, they’re afraid to correct them because they may cry racism. ... Whites have to overcome the fear of being called ‘racist.’”

Wondering which white people Peterson is hearing from? Self-described white separatist Virginia Abernethy, who sat on the editorial advisory board of the white supremacist Council of Conservative Citizens’ (CCC) The Citizens Informer, told Max Blumenthal of The Nation that she considers Peterson a friend. And CCC member Barbara Coe joined the reverend at a 2011 tea party rally devoted “to expos[ing] NAACP lies and their big government agenda.”

Another WND columnist whose defense of Deen is noteworthy is Ilana Mercer, who says Deen is being punished for “transgress[ing] against America’s many Orwellian Ministries of Truth” and laments the “typical invertebrate conservative pundit[s]” who have supposedly hung Deen out to dry.

Mercer herself is no typical conservative pundit. A U.S.-based writer of South African Jewish descent, she is an apologist for South African apartheid whose writings appear often on the white nationalist website VDARE, where they share space with material produced by professor Kevin MacDonald, America’s pre-eminent academic anti-Semite. VDARE founder Peter Brimelow, a British immigrant who frets that, due to immigration from non-European countries, “America will become a freak among the world’s nations because of the unprecedented demographic mutation it is inflicting on itself,” penned the introduction to Mercer’s 2009 book, Broad Sides: One Woman’s Clash with a Corrupt Culture.

In 2011, John Derbyshire, who was fired from the conservative National Review in 2012 after suggesting in an essay that white and Asian parents should warn their children that black people pose a threat to their safety, rhapsodically blurbed Mercer’s more recent book, Into the Cannibal’s Pot: Lessons For America From Post-Apartheid South Africa.

Mercer, who has contributed articles to the CCC’s Citizens Informer, has also been quoted approvingly on the website of American Renaissance, a white nationalist journal that promotes pseudo-scientific studies and research purporting to show the inferiority of blacks to whites.

Peterson and Mercer are not the only WND writers to defend Deen. Erik Rush — who is black and the author of Negrophilia: From Slave Block to Pedestal – America’s Racial Obsession, which argues that “the undue and inordinate affinity for blacks” has led to a state of affairs in which “racism on the part of blacks is [considered] acceptable, or even proper” — voiced shock and outrage at the press’ treatment of the Southern celebrity chef. So did Barbara Simpson, a regular WND contributor who among other things blamed antidepressant drugs for the December 2012 massacre at Connecticut’s Sandy Hook Elementary School.

WND founder Joseph Farah also weighed in, noting that while he detests the “media and corporate establishment” for its “vitriolic, unforgiving, ravenous wolf-pack reaction to her racial indiscretions,” he also kind of thinks Deen got what she deserves because she is a Democrat – which political party, Farah says, “was founded as the political wing of the Ku Klux Klan and fought desegregation and civil rights through the early 1960s.” (Not so, as we’ve noted before. (1) The Democratic Party was founded long before the Klan, and (2) After the early 1960s, Democrats embraced civil rights, and Southern Democrats who opposed desegregation switched parties, walking straight into the arms of the GOP, which took up the banner for civil rights opposition thereafter. But we digress.)

WND’s embrace of Paula Deen, and its over-the-top shrieks about white victimization at the hands of black bigots, should come as no surprise. The Internet tabloid, which claims to oppose racism in any form, has for about a year now been publishing the work of one Colin Flaherty, who specializes in reporting on “black-on-white violence.” Flaherty, whose fan base includes the professional racists at American Renaissance, argues that “black-on-white” attacks have gone through the roof and the only reason you don’t know about it is because the “liberal media” has colluded to keep the story under wraps.

Justifying his presence, WND precedes all of Flaherty’s reports with a prim editor’s note, stating, among other things, that, “WND considers it racist not to report racial abuse solely because of the skin color of the perpetrators or victims.”

Based on its coverage of the Paula Deen affair, WND does not consider it racist to be racist. And for all its condemnation of supposed “race hustlers” cashing in on racial tension in the country, WND itself doesn’t mind reaping what rewards may come, in terms of Internet traffic and actual money, when the racial balance suits its purpose. Joseph Farah says he despises Paula Deen, but he’s all too happy to gin up outrage over her supposed victim status. And he doesn’t mind the prospect of making a quick buck doing it. As he wrote in his Friday commentary, “If Paula Deen is looking for a publisher who still believes in free enterprise and the First Amendment to distribute her new book, I’m just a phone call or email away. I’m obviously not sugar-coating it. I’m not sucking up or making excuses for anything Paula Deen has done. I just believe to preserve a free society, we have to guard vigilantly against witch hunts like this.”