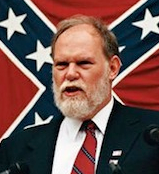 Michael Hill, the increasingly militant head of the neo-Confederate League of the South, has reached a conclusion following the revelation this week that Jack Hunter, an aide to U.S. Sen. Rand Paul (R-Ky.) has long harbored neo-Confederate beliefs: It may no longer be possible for the radical right to work within the confines of mainstream politics, or, specifically, the Republican Party.

“[T]here’s no place in the GOP for Southerners who wish to remain ... Southerners,” Hill said in a statement quoted on the white nationalist Occidental Dissent website.

“Just so there’s no chance you’ll confuse The League with the GOP or any other ‘conservative’ group, here’s what we stand for: The survival, well being, and independence of the Southern people,” Hill said. “And by ‘the Southern people,’ we mean White Southerners who are not afraid to stand for the people of their race and religion.”

Hill’s proclamation comes after several Republican operatives and a civilian military contractor were exposed for their affiliations with racist or white nationalist organizations. South Carolina Gov. Nikki Haley recently dismissed Roan Garcia-Quintana, named as a member of her re-election campaign’s steering committee, after his position as a board member for the racist Council of Conservative Citizens (CCC) was disclosed. In May, John Stortstrom, a mechanical engineer who worked for the Army’s Edgewood Chemical Biological Center in Maryland, was suspended after reports that he was among 150 white nationalists who attended the American Renaissance conference last April in Tennessee.

Hunter Wallace, the blogger on Occidental Dissent, agreed with Hill’s assessment, writing that “what recently happened to Roan Garcia-Quintana and now John Stortstrom … shows that the door has closed on working within the Republican Party, Conservatism, Inc., and reforming the political system.”

Hunter continued: “A few years ago, there was still a lot of confusion on this issue. I myself wanted to believe that we could work within the Republican Party to reform the system. I was right … we can work within the system at the state and local level, in the South, up to the point where things start to really matter and the national media and the federal government slaps us down like they did with Arizona’s SB 1070, California’s Prop 8, and Alabama’s HB 56.

“If the enemy wasn’t so drunk with power, they would continue to cultivate such illusions for our time, money, and energy would continue to be squandered on the GOP, Conservatism, Inc., the Ron Paul Revolution and other such nonsense.”

For his part, Hill has in recent years become more blunt in suggesting that violence is the answer. At the League’s March 2011 meeting in Georgia, he urged his members to stock up on AK-47s, hollow-point bullets and tools to derail trains. That summer, at the League’s annual conference, the leader asked, “What would it take to get you to fight? The mantra [that] violence, or the serious threat thereof, never settles anything is patently false. History shows that it indeed does settle many things.”