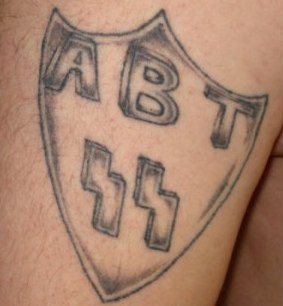 Federal prosecutors in Texas have obtained guilty pleas from eight of the 35 members of the Aryan Brotherhood of Texas (ABT) charged with racketeering and a host of violent crimes, including murders, arsons, robberies and assaults.

The first guilty pleas in the massive prosecution came just two months after federal charges were filed, suggesting prosecutors have a strong case and are working to strike deals with some of the accused who could get lighter sentences in exchange for cooperation. But some of the guilty pleas include specific language that the defendant isn’t cooperating — so they don’t end up with a “snitch jacket” and protective custody while doing prison time.

The latest plea came Thursday in U.S. District Court in Houston from Samantha Goldman, 29, of Houston, who pleaded guilty to one count of conspiracy to participate in racketeering activity.

Among her “Aryan” associates, Goldman was known as a “featherwood” — a female racist skinhead — who operated a support hub for ABT’s criminal enterprises. Court documents say Goldman facilitated communication of criminal activities among imprisoned gang members. Specifically, she was involved in communications regarding gang-related business, collection of dues, commission of disciplinary assaults against fellow gang members, and acts of violence against rival gang members and other crimes.

By pleading guilty to federal racketeering charges, Goldman has admitted to being an associate of the ABT criminal enterprise, federal prosecutors said.

Court documents say Goldman and other ABT gang members and associates engaged in racketeering by agreeing to commit multiple acts of murder, robbery, arson, kidnapping, and narcotics trafficking on behalf of the white supremacist gang.  She could receive a term of up to life in prison when she sentenced Oct. 17 by U.S. District Judge Sim Lake.

Goldman was indicted last November by a grand jury after being identified for her role in the organization described by prosecutors as a “violent, whites-only prison-based gang with thousands of members operating” in and out of prisons throughout Texas and elsewhere.

Initially, the indictment says, the ABT was primarily concerned with the protection of white inmates and white supremacy and separatism, but over time expanded its criminal enterprise to include illegal activities for profit.

Among those charged in the indictment are four senior leaders or ABT “generals” — Terry Ross “Big Terry” Blake, 55; Larry Max “Slick” Bryan, 51; William David “Baby Huey” Maynard, 42, and Charles Lee “Jive” Roberts, 67.  Of those leaders, only Roberts has entered a guilty plea. He pleaded guilty on May 10 to a single racketeering conspiracy charge and faces up to life in prison when he’s sentenced in September.

On June 27, James Marshall “Dirty” Meldrum, 40, of Dallas, was sentenced to 150 months in prison for his involvement in the gang’s criminal activities.  He pleaded guilty on Jan. 31 to one count of conspiracy to commit racketeering offenses.

Meldrum admitted to being an ABT gang member and to trafficking in methamphetamine and severely beating a subordinate gang member. Meldrum and numerous ABT gang members met on a regular basis at various locations throughout Texas to report on gang-related business, collect dues, commit disciplinary assaults against fellow gang members and discuss acts of violence against rival gang members, among other things, according to U.S. Attorney Kenneth Magidson and Acting Assistant Attorney General Mythili Raman of the Justice Department’s Criminal Division.

Court documents allege Morris, Folmsbee and other ABT gang members and associates, agreed to commit multiple acts of murder, robbery, arson, kidnapping and narcotics trafficking on behalf of the gang.

The first two guilty pleas came Jan. 31 from Meldrum and Ben Christian “Tuff” Dillon, 40, of Houston. Both pleaded to one racketeering conspiracy count, confessing to being ABT gang members and engaging in multiple acts in support of the criminal enterprise.