A Canadian judge today extended an interim injunction prohibiting a bequest worth some $160,000 from being transferred to the National Alliance (NA), a U.S. neo-Nazi group. The estate was left to the group by a Canadian chemist and NA member who died in 2004, and included a collection of ancient Greek and Roman coins. 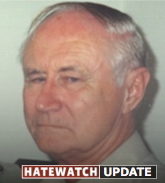 Attorneys for Isabelle McCorkill are contesting the will of her late brother, Robert McCorkill, on the grounds that giving the money to a hate group with a record of criminal violence violates Canadian public policy and law. Members of the NA have a long history of committing major crimes and acts of terrorism, and a book authored by its late founder inspired the 1995 Oklahoma City bombing.

The injunction, extending a preliminary ban that was for only 10 days, lasts until the matter goes to trial on Sept. 10.

In seeking to get the interim injunction lifted, NA Chairman Erich Gliebe and the executor of the estate, former NA member Fred Gene Streed, suggested in affidavits submitted to the court in New Brunswick that characterizations of the NA as a neo-Nazi group were “deliberately misleading,” in the words of Streed. Like Gliebe, Streed took particular issue with an affidavit submitted to the court describing the ideology and actions of the NA by the author of this post. Although the Southern Poverty Law Center (SPLC), which publishes this blog, is not an intervener in the case, Streed described the SPLC’s role as that of an “officious intermeddler.”

In his affidavit, Gliebe cited a 2005 NA Members’ Handbook clause stating that the group had a “zero tolerance” policy toward illegal activity and would expel any member involved in or “even hinting” at participation in such activities.

Gliebe went further, suggesting his main purpose in joining the NA in 1990 was “to introduce traditional European culture to its activities.” To buttress this dubious point, he said that at the time he was “a member of a German folk dance group which performed at festivals and other functions.” Referring to his later role as head of NA’s Resistance Records, a white-power music label, Gliebe cited NA founder William Pierce’s alleged desire to introduce young people “to classical and European folk music.” He did not mention Pierce’s ancillary comments about how young white people’s minds and culture were being destroyed by listening to “Negroid rhythms.”

Gliebe accused the SPLC of using “decades old” quotes from what he admitted was “the NA’s foundational document” to “stir up concerns that the present-day NA has violent intentions” and to “inject the past into the present.”

Gliebe apparently forgot to mention that the NA, and its leadership, have a considerably closer association with racist criminal violence than a few quotes extracted from old documents. For starters, a number of NA recruits have been convicted of criminal activity, including several murders, since Gliebe took over following Pierce’s 2002 death.

Most dramatically, however, Gliebe neglected to mention how, after he temporarily resigned the chairmanship in April 2005 — the result of vicious internecine battles within the group — the leadership post was given to Shaun Walker, who Gliebe had appointed in 2002 as the NA’s western states regional coordinator and later promoted to chief operating officer. Less than a year after being chosen to replace Gliebe, Walker was arrested on federal civil rights charges for leading a series of organized attacks on Mexicans and American Indians in Salt Lake City bars in 2002 and 2003. The arrest forced Walker to step down, with Gliebe again taking up the NA leadership in July 2006. In 2007, Walker was convicted of conspiracy to interfere with the civil rights of individuals based on their race and sentenced to 87 months in federal prison. In 2009, after winning a sentence reduction, he was released.