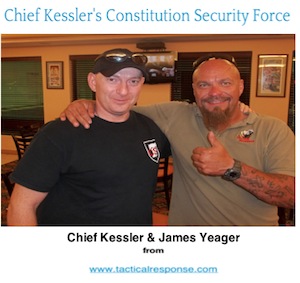 Looks like Mark Kessler, the gun-crazed militia leader and police chief of Gilberton, Pa., has found himself a new compatriot. Sometime recently, Kessler posted on the homepage of chiefkessler.com a picture of himself with James Yeager, another antigovernment nut who is also into weapons.

You may remember Kessler, who posted videos to YouTube filled with angry antigovernment rants that became something of an Internet sensation last month. One of the videos that went viral had him talking about conspiracy theories involving the United Nations and U.S. Secretary of State John Kerry. In another, Kessler offers basic firearms lessons, using a target of a clown he says represents Democratic House Minority Leader Nancy Pelosi. The Gilberton Borough Council suspended him earlier this month.

So it’s not surprising Kessler would hook up with Yeager, who went on his own crazed antigovernment rant after new gun regulations were considered by Congress and the White House in the wake of the Sandy Hook school shooting late last year. Yeager, who owns Tactical Response and Tactical Response Gear Inc., based in Camden, Tenn., had said on a YouTube video posted early this year that if President Obama used executive orders to ban assault rifles, “I’m going to start killing people.”

Perhaps we have a budding government-hating bromance on our hands.