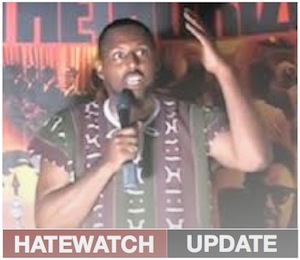 The war is on! The smallhats (white so-called jews) have stepped it up.

So begins a defiant screed posted this weekend on the Facebook page of War on the Horizon (WOH), the anti-white, anti-LGBT website operated by Ayo Kimathi, a black Department of Homeland Security employee.

Kimathi was put on paid administrative leave last Friday after his double life – DHS employee by day, angry, homophobic racist by night – was confirmed and reported by Hatewatch on August 21. Kimathi, a small business specialist, works for a unit of Immigration and Customs Enforcement (ICE) that is responsible for procuring such items as handcuffs, ammunition and guns.

Kimathi calls himself “the Irritated Genie” as he goes around the country predicting and advocating race war. He apparently has no intention of putting the genie back in the bottle.

Less than 48 hours after Kimathi was put on leave, the Facebook page for WOH declared that “the Irritated Genie is under attack from the zionist smallhats, the Uncle Tom koons, the white-sex offenders, the haters, the conspiracy theorists, etc. … Our website is getting flooded with traffic at the moment, but we expect the owner of our hosting to terminate our website any day now.”

The Facebook posting also says “the smallhats” have “canceled our internet business account. Therefore, we can no longer sell our products on the internet.

“So since we cannot sell them to our people,” the post continues, “we’ll simply give them to you and ask you to share them with your Black friends and family all across the world.”

Kimathi has apparently been operating the site that advocates the mass murder of whites and the “ethnic cleansing” of “black skinned Uncle Tom race traitors” for several years while cashing a paycheck from the DHS.

It appears he did little to hide this seeming contradiction. Lots of people, except for DHS officials it seems, knew about him. In 2010, the Internet gossip site Media Take Out, which bills itself as “the most visited urban website in the world” and was recently profiled by The New York Times, posted a brief item about the “Black Conscious Revolutionary known as the ‘Irritated Genie’ (Ayo Kimathi of Washington, DC).”

“This gentlemen works for the American clandestine Agency known as Homeland Security,” the post says. “Part of Homeland Securities [sic] job is to be on the look out for Domestic Terrorism and, if need be spy on and entrap people who may pose any type of threat to the nation’s National Security.

“Now here’s my opinion … [t]his is the equivalent during American slavery of a slave who works for SLAVE CATCHERS and goes around to all the plantations trying to provoke the slaves to run away.”

The question is, did Kimathi’s bosses at DHS and ICE know about his life as the Irritated Genie. If so, why didn’t they do something about it before now?

Hatewatch called a spokeswoman for ICE today, hoping to find out, but she said the department was not granting interviews about Kimathi.

As for the Irritated Genie, the last several days have been, well, irritating.

“We still have our radio station,” WOH’s Facebook page says, “but we don’t know how much longer we will have easy access to sharing our message with you.”