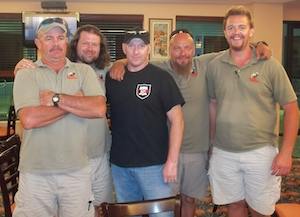 Looks like the “libtard”-hating and profanity-loving police chief of Gilberton Borough, Pa., has been suspended indefinitely. According to The Patriot News, the Gilberton City Council voted unanimously to keep Mark Kessler on suspension for “using borough property for non-borough purposes without prior borough permission.” The paper reports that this situation will hold until council members can meet with Kessler’s attorney, Joseph Nahas.

Kessler’s own website says without offering any supporting evidence that “[b]orough officials plan on full termination within the first week of September” and that these circumstances came about “because elites in Washington D.C. demanded his JOB.” Though it is unclear what will happen in the end to Kessler, he does appear to have another business proposition already in the works. His website reports that Kessler is now conducting firearms training for Tactical Response, which is run by James Yeager out of Camden, Tenn.

You may remember Yeager, an antigovernment extremist who went on his own crazed, profanity-laden rant after new gun regulations were considered by Congress and the White House in the wake of the Sandy Hook school shooting late last year. Yeager said on a YouTube video posted early this year that if President Obama used executive orders to ban assault rifles, “I’m going to start killing people.”

For those interested, Kessler’s first training will come on Oct. 5 in McAdoo,Pa. Advertised as “Come shoot with Chief Kessler,” the suspended sheriff will be leading a beginner pistol course for Tactical. All the firearms lover needs is $300, five magazines, eye and ear protection, and a strong holster.