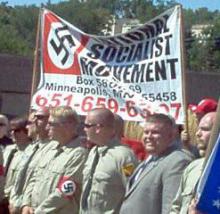 If you plan on going to downtown Kansas City, Mo., tomorrow afternoon to protest the neo-Nazis coming to town, remember: no baby strollers or car seats. No coolers. No purses. No portable heaters. No water bottles. No bullhorns without a permit. No knives or guns, even with a permit.

The long list of “prohibited items” was issued this week by the Kansas City Police Department as the Midwest metropolis famous for barbeque and jazz gears up for a neo-Nazi invasion.

On Saturday, the 75th anniversary of Kristallnact, the National Socialist Movement (NSM), the largest neo-Nazi group in the United States, is scheduled to hold an anti-immigration rally at the Jackson County Courthouse in downtown Kansas City at 3 p.m.

Among the speakers is Matt Heimbach, the 22-year-old campus organizer who founded the White Student Union at Towson University and who runs the Traditionalist Youth Network.

At least two counter-protests and pro-diversity events are planned, including a demonstration organized by a grassroots coalition of anti-racist activists and immigration reform supporters to be held downtown at the same time as the hate-fest and as close to the neo-Nazis as the police will allow them to get – which will not be close.

Jessica Piedra, an immigration attorney and board president of the Latino Coalition of Kansas City expects the counter-protesters and the neo-Nazis will be separated by at least “one main street” and a phalanx of police officers. Anyone coming into the area around the courthouse will have to enter through designated police checkpoints where they will be searched for weapons and other prohibited items, according to the Kansas City Star.

About a mile and a half away at the Liberty Memorial, another multiracial, anti-hate rally is scheduled for Saturday afternoon, featuring speakers from the city and mainline civil rights groups such as the NAACP and the League of United Latin American Citizens.

“We just felt we wanted to be on higher ground away from them, the Nazis,” said Rick Behrens, a local pastor and president of Advocates for Immigrant Rights and Reconciliation (AIRR). “We’re not interested being downtown, shouting at the Nazis. There’s nothing to be gained. We want to have a peaceful rally that lifts up our values of welcoming people.”

Piedra also wants to have a peaceful rally, but one close enough for the Nazis to hear and see that they are not welcome in Kansas City.

“I think there are a lot of reasons to confront them,” she said. “It’s more energizing to your base to be right there where the action is happening. And I think we need to get our cause in the spotlight at any opportunity that we can, not just anti-racism, but specifically immigration reform.”

While the approaches of the anti-hate rallies may be different and distant, both Piedra and Behrens agree with the words of Leonard Zeskind, a longtime observer of the radical and racist right.

“Not giving a response to these racists and anti-Semites effectively gives them an invitation to come back,” Zeskind wrote recently in the Kansas City Star. “And it gives them a green light to the most awful forms of bigotry. In fact, a full-throated response from every corner of the community is an absolute necessity.”

“The most important thing is, first of all, stand up,” she said. “But it would have been nice to stand together.”