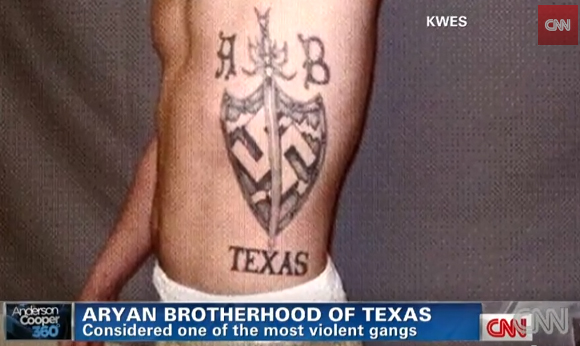 Federal prosecutors now have guilty pleas from fully half the 36 members of the Aryan Brotherhood of Texas (ABT) who were indicted last year for committing multiple acts of murder, robbery, arson, kidnapping and narcotics trafficking.

To date, 18 of the defendants have entered guilty pleas, and the remaining 18 are scheduled to stand trial May 12 in U.S. District Court in Houston. Other guilty pleas likely could occur between now and the trial date.

The ABT is considered one of the most violent crime syndicates in the United States – responsible for crimes both in and out of prisons. It was established in the early 1980s within the Texas penal system, modeling itself around the white supremacist philosophy of the Aryan Brotherhood, a California-based prison gang formed in that state’s prison system during the 1960s.

“The ABT offered protection to ‘white’ inmates if they joined the gang,” the indictment says.

Maynard is the second “general,” or leader, of the ABT to plead guilty. Charles Lee “Jive” Roberts, a 68-year-old ABT general, was sentenced in late September  to 30 years in federal prison without the possibility of parole for crimes that included the ordering of six murders in 2011.

The U.S. Department of Justice has withdrawn its option of seeking the death penalty in the case, but many of the defendants still face life in prison without the possibility of parole.

The federal racketeering law allows prosecutors to include multiple crimes – so-called predicate acts – in one all-encompassing indictment. In the ABT case, the indictment alleges Shipman, Maynard, Harris and others “agreed to commit multiple acts of murder, robbery, arson, kidnapping, and narcotics trafficking on behalf of the ABT gang” in an enterprise that went back to at least 1993.

“The defendants and numerous other ABT gang members met on a regular basis at various locations throughout Texas to report on gang-related business, collect dues, commit disciplinary assaults against fellow gang members and discuss acts of violence against rival gang members, among other things,” court documents say.

Some court documents in the case are sealed from public inspection, so it’s not clear how many of the 18 defendants who have pleaded guilty will testify for the prosecution in exchange for lighter sentences. Defense attorneys for some defendants have said their clients are not cooperating even with the entry of guilty pleas.