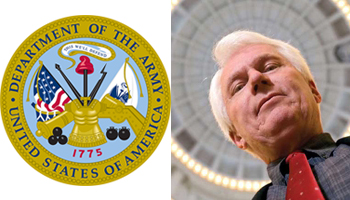 The U.S. Army, in its guide on extremist activities, notes that the “Department of Defense has a longstanding policy of intolerance for organizations, practices, or activities that are discriminatory in nature.” It also notes that “[h]igher and more restrictive standards of conduct distinguish military personnel from their civilian counterparts.” As a result, “[p]articipation in extremist organizations and activities by Army personnel is inconsistent with the responsibilities of military Service.”

Unfortunately, recent actions by Army Secretary John McHugh have worked to undermine this standard. Facing sustained pressure from prominent anti-LGBT hate groups, McHugh has thrown open the doors for service members to actively participate in such groups – and worse.

McHugh and the Army came under fire in October when Todd Starnes, a commentator on Fox News Radio, wrote an article about an equal opportunity briefing at Camp Shelby in Mississippi. The briefing, which apparently drew from Southern Poverty Law Center (SPLC) materials, correctly listed the American Family Association (AFA) as a hate group.

Starnes’ sensationalized pieces suggested that the Army had “labeled Christians as extremists” “because of their support for traditional marriage.” That couldn’t be further from the truth. First off, it’s laughable for Starnes to equate all Christians with a viciously anti-LGBT group. Secondly, the SPLC’s designation of AFA as a hate group had nothing to do with biblical beliefs or opposition to same-sex marriage and everything to do with the group’s demonization and lies about LGBT people. The group routinely smears gays as pedophiles and claims, incredibly, that “homosexuals in the [German] military gave us the Brown Shirts, the Nazi war machine and six million dead Jews.”

As I noted last week, the group’s spokesperson and head of public policy – Bryan Fischer – has an outrageous record of commentary on matters involving the military. For one thing, Fischer wants to kick out women, saying we must “bring to an end the practice of putting women in the military.” He also wants to ban LGBT people from the ranks and has said we must “stop the practice of allowing Muslims to serve in the U.S. military.”

Fischer recently warned that the military is being trained to use “lethal force” against Christians, and the group’s president baselessly threatened to take legal action against the Army. In spite of this apparent lunacy and the AFA’s history of extremist rhetoric, McHugh has given the Tupelo, Miss.-based group what it so desperately seeks – legitimacy.

In an October 18 memo, McHugh cited media accounts (i.e. Starnes) that “highlighted instances of Army instructors supplementing programs of instruction and including information that is inaccurate, objectionable and otherwise inconsistent with current Army policy.” The “groups identified in the instruction were not ‘extremist’ organizations as that term is defined in Army Regulation 600-20,” McHugh wrote.

A review of Army Regulation 600-20 reveals that McHugh’s determination is based on a cramped, and perhaps inaccurate, interpretation of the regulation. What’s more, the determination runs counter to a military-wide directive from the Department of Defense (DOD). What is clear, however, is that his determination throws open the door for service members to join anti-LGBT hate groups.

The regulation that McHugh cited in his memo, 600-20, says it “must be used in conjunction with DODD 1325.6.” DOD directive 1325.6 establishes “policy, assigns responsibilities, and provides procedures for handling dissident activities and protest activities among members of the Armed Forces.” The first section under “Prohibited Activities” reads as follows:

Military personnel must not actively advocate supremacist, extremist, or criminal gang doctrine, ideology, or causes, including those that advance, encourage, or advocate illegal discrimination based on race, creed, color, sex, religion, ethnicity, or national origin or those that advance, encourage, or advocate the use of force, violence, or criminal activity or otherwise advance efforts to deprive individuals of their civil rights.

The AFA unquestionably advances “efforts to deprive individuals of their civil rights.” Fischer began a column last year by arguing that “[i]t is time for conservatives to reclaim and rehabilitate the word ‘discriminate,’ particularly when it comes to homosexual behavior.” He has called for all Muslims to be deported, said the First Amendment doesn’t protect Islam, and argued that “[p]ermits should not be granted to build even one more mosque in the United States of America.”

The AFA, like many hate groups, does not advocate the use of force or violence. As the Army’s guide on extremist activities notes, “[m]odern extremist groups run the gamut from the politically astute and subtle to the openly violent.” However, the AFA has and does promote forms of discrimination that would violate civil rights laws if acted upon. In at least one circumstance, Fischer flirted with encouraging criminal activity when he justified a kidnapping and suggested an “underground railroad” to smuggle children away from gay parents.

The AFA appears to easily meet the DOD extremist group standard because it does work to “advance efforts to deprive individuals of their civil rights.” But what about the regulation specifically cited by McHugh? Army Regulation 600-20 says service members must “reject participation” in the following:

Extremist organizations and activities are ones that advocate racial, gender, or ethnic hatred or intolerance; advocate, create, or engage in illegal discrimination based on race, color, gender, religion, or national origin, or advocate the use of or use force or violence or unlawful means to deprive individuals of their rights under the United States Constitution or the laws of the United States[.]

You’ll note that sexual orientation is missing from the list of protected classes. On that basis, McHugh determined that the AFA is not an extremist group under 600-20. In doing so, he opened the door wide for service members to actively participate in hate groups. By McHugh’s reading, service members apparently can advocate anti-LGBT “hatred or intolerance” or “advocate, create or engage in illegal discrimination based on” sexual orientation – so long as they don’t  use “force or violence or unlawful means” in the process. That’s a terrible precedent to set, particularly in the post-DADT era.

Even setting aside the question of whether the standard applies to anti-LGBT hate groups, it isn’t clear that McHugh’s interpretation is accurate or consistent with Army and DOD regulations. Regulation 600-20 cites organizations that “advocate racial, gender, or ethnic hatred or intolerance” – all of which the AFA has done. Fischer wants to prevent women from holding public office and says that Hispanics are “socialists by nature” who “plunder of the wealth of the United States.” He has said that African-American women “rut like rabbits” to get more welfare money.

Fischer has also advocated “illegal discrimination” on the basis of religion. As described above, Fischer wants to purge American Muslims from the military, prevent them from practicing their religion and ultimately deport them. To sum up, the AFA meets the extremist group standard under the DOD regulation and the Army regulation, even under McHugh’s cramped interpretation.

McHugh has made a determination that runs counter to the stated objective of the Army’s guide on extremist activities, which says the “Army places a high value on the rights of its members to live and work in an environment free of harassment and maltreatment.” It also runs counter to the guidance provided to the armed services by Under Secretary of Defense Clifford Stanley following DADT repeal. He wrote that all service members “regardless of sexual orientation, are entitled to an environment free from personal, social, or institutional barriers that prevent Service members from rising to the highest level of responsibility possible.”

Service members should not be actively participating in groups that promote and create such barriers, such as the AFA, which wants to remove women, Muslims and LGBT people from the military. McHugh has, intentionally or not, opened the door wide for bigotry in the Army. He should order a fuller examination of the military’s standards on extremist organizations and implement policies and training materials that truly protect and promote equal opportunity.