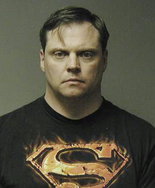 An Ohio neo-Nazi who amassed a huge illegal stockpile of weapons, along with an apparent hit list of Detroit-area Jewish and African-American leaders, was given a six-year sentence Thursday by a federal judge in Toledo, Ohio. Civil rights leaders in Detroit, including one on the man’s list, expressed their outrage at what they saw as a light sentence.

Richard Schmidt, a 48-year-old with an earlier felony manslaughter conviction to his credit (he was found guilty of murdering a Latino man outside a bar in 1989), pleaded guilty in July to a variety of federal weapons charges. Even though he was forbidden from owning firearms by virtue of his record as a felon, Schmidt had amassed a cache of 18 guns, 40,000 rounds of ammunition, and a full complement of body armor.

That wasn’t all police found. The most chilling piece of evidence was a detailed list of civil rights leaders in the Detroit area: their home addresses, as well as other personal information. Additionally, his personal writings indicated that he intended "to assassinate members of religious and cultural groups based only on their race, religion and ethnicity and to broadcast those murders to like-minded supporters,” according to Assistant U.S. Attorney Duncan Brown, the chief prosecutor in the case.

"This defendant, quite simply, was a well-funded, well-armed and focused one-man army of racial and religious hate,'' Brown wrote in a sentencing memorandum.

Nonetheless, U.S. District Judge Jack Zouhary found that there wasn’t enough evidence to establish that Schmidt’s list was part of an assassination plot. He sentenced Schmidt instead on the remaining weapons convictions; under sentencing guidelines, Schmidt was eligible for up to 10 years in prison, but instead got six.

The judge noted there was no evidence that Schmidt had been plotting with other people. He was troubled by the large amount of weapons that Schmidt had amassed, but said it was not clear why he had done so.

The Rev. Wendell Anthony, president of the Detroit NAACP branch, was one of the people on Schmidt’s list. He attended the sentencing and told reporters afterward that he was outraged, though he was unsure if the list really meant he had been targeted.

"Just having your name mentioned is bad enough," he said.

Schmidt’s attorney, Edward Bryan, had argued that his client was no menace to anyone else; rather, he just was preparing for the end of the world." He's a survivalist; he had no intent to cause anyone harm,'' said Bryan, a federal public defender in Cleveland. "His collection of firearms and ammunition was similar to his collection of other items. He believes that our society may collapse one day, and he had to be prepared for what would happen.''

Schmidt told the judge he shouldn’t have compiled the list of civil rights leaders, but the intent was harmless, despite prosecutors’ allegations to the contrary.

"I had no intent to do any of those things," he said. Schmidt had made his living after prison operating a sports-memorabilia shop in Bowling Green, Ohio. He came to authorities’ attention by importing badly made, fake National Football League jerseys and other pro-sports gear for sale in his shop. Paperwork for the shipments indicated such articles of clothing as women’s camisoles and menswear, but inside were counterfeit ball caps and jerseys that could sell for larger sums.

When FBI agents arrested him in December 2012, they found much more than counterfeit NFL gear. One room of Schmidt’s house was a climate-controlled den dedicated to his huge arsenal of weapons. Agents also found his hate-drenched scribblings, along with a library of hate literature and neo-Nazi propaganda.

Schmidt had crossed the SPLC’s radar as early as 2005, when he operated a nonprofit ostensibly designed to promote environmental and historical-preservation causes called the Vinland Preservation League, apparently as an offshoot of the racist-skinhead outfit Vinlanders Social Club. The Vinlanders had a well-established reputation for drunken violence and for following a racist version of paganist Odinism as their religion.